I heard the one-time Clinton cabinet member say it myself – in a room full of journalists, no less.

Each one of us ate that divisive one-liner up…

"President George W. Bush abandoned Clinton's diplomatic plan [for North Korea] for his own more confrontational model," Perry said. Such a condemnation had me anxious to get back to my desk after the panel, intent on devoting an entire article to Perry's Bush-blaming. I wanted Money Morning readers to know his thoughts on how the post-Clinton White House was largely responsible for Pyongyang's aggression. 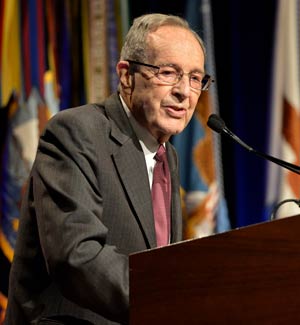 But before I got started, I asked for Bill Patalon's thoughts on Perry's statements.

As Money Morning's executive editor, Bill has been covering the Asian arms race since the South China Sea first began to roil to life in 2013 – years before the mainstream media picked up on the activity there.

And as far as his coverage of North Korea is concerned, he's been writing about the United States' fraught relationship with the regime for over three decades.

Bill listened to my shocked rehash of Perry's statements and to my plans to write an entire article outlining them.

Here's what I told him about the former defense secretary's comments from last week, as well as everything Bill said that completely changed my perspective on each one.

First, I told Bill about how Perry recounted his time as defense secretary in the 90s, when he brokered a deal with North Korea – a deal that he now blames Bush for dismantling…

That was when "[the U.S. was] serious about striking [a North Korean weapons test site]," Perry said.

Indeed, in June 1994, North Korea had just shut down its nuclear reactor at Yongbyon in order to remove spent fuel rods that contained enough plutonium to make five or six bombs.

The International Atomic Energy Agency (IAEA) turned the matter over to the United Nations Security Council at that point. And the council then threatened sanctions on North Korea – sanctions Pyongyang quietly ignored before continuing to harvest the potentially lethal spent fuel rods.

And a standstill between the United States and North Korea commenced – one that remained in place for four months. Until October of that year…

That's when the United States and North Korea were able to come to an agreement following intense diplomatic discussions: the "Agreed Framework."

Basically, the Agreed Framework allowed Pyongyang possession of two "more proliferation-resistant" light-water reactors in return for the promise that the small nation would end its nuclear arms program and agree to regular inspections at a later time.

Perry admitted that the talks around the Agreed Framework 24 years ago amounted to "coercive diplomacy that yielded an agreement, imperfectly implemented."

Nonetheless, he said, the discussions brought about a truce — one that halted "the regime's nuclear progress for a time."

"Remember," Bill said, "Perry was the defense secretary under Clinton, so he's 'patting himself on the back' here and then pointing fingers at the 'other guy.'"

I asked him to explain.

"For instance, how about Hans Blix, the International Atomic Energy Agency (IAEA) chair back then? He ripped the agreement that was reached and said he wasn't thrilled with the framework because it gave Pyongyang too much time to comply with the inspections deal," Bill said.

He then pointed out that, because the Agreed Framework allowed Pyongyang such inspection "wiggle room" – allowing the dynasty to simply agree to inspections at a "later date" – the regime was able to launch a "satellite" in 1998 that defense analysts suspected was really a clandestine test of a ballistic missile.

"It actually overflew Japan," Bill added, "which caused Tokyo to yank something like a billion dollars in aid from Pyongyang for the two commercial reactors that were part of the trade for North Korea to end its nuke program."

The notion that Perry's "imperfectly implemented" truce had been falling apart as early as 1998 was revelatory… especially given that Bush, his scapegoat, didn't take office until 2001.

During his condemnation of the Bush administration, the former defense secretary also explained that he attempted to maintain a working U.S./North Korea relationship after his official tenure with the Clinton White House was over.

During that extended time, he managed to keep former North Korean dictator Kim Jong Il's threats of striking the United States from becoming a reality (though Il continued to promise America's ultimate destruction on a regular basis – much like his son Kim Jong Un does now).

Perry said he achieved that state of "normalcy" by, once again, maintaining regular diplomatic talks with Pyongyang.

And that's when Perry pointed fingers at the former Bush administration for provoking North Korea's aggression by adopting a combative position of its own….

On Jan. 29, 2002, for example, President Bush labeled North Korea, Iran, and Iraq an "axis of evil" in his State of the Union address. "By seeking weapons of mass destruction," he said, "these regimes pose a grave and growing danger."

WMDs in North Korea Were – and Are – Quite Real

Bill said that it had been James Kelly, the assistant secretary of state under Bush and an expert on Asian affairs, who had visited Pyongyang and witnessed suspicious, possibly proliferative nuclear activity there.

"Kelly claimed there was evidence of a 'secret' enrichment facility that contravened the mid-90s Agreed Framework," Bill said. "And just two weeks later, Washington said that Pyongyang admitted of its own volition during talks that it had a 'clandestine nuclear weapons' program."

And it was from that point 15 years ago that the relationship between Washington and Pyongyang really began to disintegrate.

But blaming Bush's administration for uncovering North Korea's illegal and dangerous nuclear program is like blaming a corporate whistleblower for the fraudulent corporation's eventual demise. According to Bill, we can't ignore the "slippage beforehand" – meaning before Bush's presidency.

Bill pointed to recent statements made by Robert Kaufman, a professor of public policy at Pepperdine University, about the true nature of America and North Korea's dynamic…

According to Kaufman, "the North Koreans duped Jimmy Carter – an emissary of Clinton – and the Clinton administration to subsidize the North Korean nuclear program in exchange for the counterfeit promise that North Korea would limit itself to civilian nuclear power."

And here's the kicker: "The mid-90s Agreed Framework deal, in effect," said Bill, "lulled the West to sleep while Pyongyang went on to finally cross the nuclear threshold – which happened in 2002."

That kind of innovation doesn't happen overnight – it takes years…

"That means North Korea never stopped what it was doing – despite its promise to do so… and despite what the former defense secretary claims," Bill added.

In short, the very deal Perry had a hand in didn't stop or even delay North Korea's nuclear development… it just put blinders on the rest of the world.

But, Bill said, blame will get us nowhere while North Korea advances its weapons cache.

Just last week, South Korea said that a drone found crashed on a hillside near the heavily fortified Korean border was from Pyongyang

Its mission: to spy on the controversial antiballistic missile (ABM) system that the Pentagon had deployed there in support of South Korea, a U.S. ally.

On top of this latest development, Pyongyang's aggressive posturing ticks ever upward – forcing the Pentagon's strategies to evolve, too.

But this "new reality" involves plenty of profit opportunities, Bill wrote to his Private Briefing subscribers on June 16.

For example, Lockheed Martin Corp. (NYSE: LMT) is a key player in both the THAAD system on South Korea's shores and the Aegis ballistic missile defense systems positioned aboard U.S. warships.

In fact, Lockheed is so involved in protecting the United States and its allies against North Korea's threat, it's had a hand in almost every defense project the military has made thus far.