The word is out: Social Security isn't sustainable. Every American under the age of 45 is paying his or her 6.2% week after week to support a growing number of baby boomers who will live forever, leaving all the other generations with nothing.

Well, no. But you can't blame people for worrying.

After all, in 2010, Social Security payouts finally exceeded the money brought in via payroll taxes. In other words, we spent more than we made.

Fortunately, the Social Security Administration (SSA) has built up a $2.6 trillion surplus called the Social Security Trust Fund. By lending out the Trust Fund money to other government bodies, the SSA collects interest, and it's been using that interest for the past seven years to make up the spending deficit.

But by 2020, the interest alone won't be enough to cover the gap between taxes received and benefits paid out, so the program will have to start dipping into the Trust Fund itself to make its payouts.

"Our government is starving and hopelessly indebted."

According to the Social Security trustees, the Trust Fund will be completely depleted by 2034.

So long as there is a tax-paying workforce when you retire, you will receive at least something in the way of a Social Security payout.

In fact, even if absolutely nothing is done to curb this problem, benefits are only expected to be reduced by 25%. That's no small number -- but it puts to bed the myth that these benefits will disappear.

And when it comes to avoiding a depleted Trust Fund, Washington is playing with (read: fighting over) a lot of different ideas. Here's a quick rundown of what might happen with America's retirement this year - and how you can benefit the most.

Option 1: Washington Will Avoid Tax Hikes by Gouging Your Benefits

First, the obvious: We can preserve the Social Security Trust Fund by paying out less to retirees.

In December 2016, U.S. Rep. Sam Johnson (R-TX) introduced legislation that outlined several ways to do just that. For one, the proposal would gradually increase the full retirement age to 69 (it's currently 66 or 67, depending on when you were born).

An increase of only a few years could actually have a big impact. On April 29, Fortune reported that increasing the retirement age to 70 would reduce Social Security's costs by 15%. In fact, President Reagan raised the age from 65 to 67 to keep the program solvent in 1983. 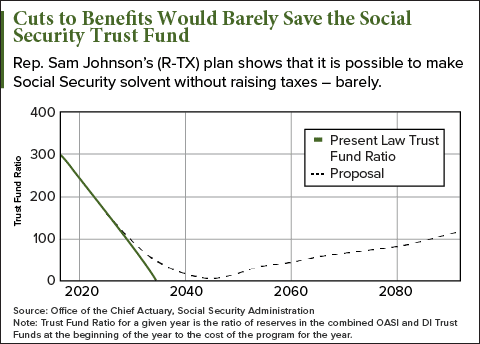 Other than decreasing the amount of time one can receive full benefits, Johnson's plan also reduces the benefits themselves. Of course, cutting Social Security benefits is incredibly unpopular, so the plan includes some roundabout ways to do so without saying it out loud.

For example, his plan includes placing a cap on the amount that nonworking spouses of retirees can receive. It also seeks to change the way that the cost-of-living adjustment (COLA) is calculated, likely lowering the annual increase for all retirees and completely eliminating it for some.

In fact, the COLA is already designed in a way that cuts benefits. You see, the SSA assesses inflation using the Consumer Price Index for Urban Wage Earners and Clerical Workers (CPI-W). The CPI-W is based on urban wage earners - a much different population than that of Social Security beneficiaries.

This means that increases in the prices of retiree-specific services - think skyrocketing healthcare costs - won't really impact the COLA, keeping Social Security payouts out of sync with the needs of the demographic it serves.

Option 2: Washington Will Boost Your Benefits... and Your Taxes

The other option for beating back the looming Social Security deficit is paying more in taxes, which is what U.S. Rep. John Larson (D-CT) has outlined in his Social Security 2100 Act. 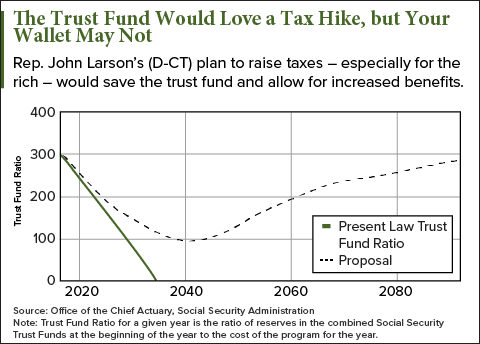 His plan hits the wealthy especially hard. You see, any wages after $127,000 are not currently taxed, but Larson wants to reinstate the tax for wages over $400,000. This sounds fine to the 99% of Americans making less than $400,000 annually, of course. But for those who do make more, it would mean spending more for Social Security without receiving much in return.

Larson's plan seeks to use this added income to increase benefits.

For example, it would base the COLA on the Consumer Price Index for the Elderly (CPI-E) instead of the CPI-W. This new index would more closely reflect the needs of retirees, and would likely result in greater annual increases to the monthly payout.

Furthermore, the plan would guarantee low-income workers a payout 25% above the poverty level, and would raise the threshold above which Uncle Sam taxes Social Security benefits.

Again, you will receive something for all of those Social Security taxes you're paying - it's the details that have yet to be decided. But given how Congress has become more and more partisan over the years, those details are likely to remain undecided for some time.

In other words, don't rely on the government for your retirement.

Money Morning Chief Investment Strategist Keith Fitz-Gerald is an expert on planning for retirement, and he knows better than to trust the government with something so important.

Indeed, he warns that the tax laws surrounding retirement may see many changes in the coming years as Uncle Sam frantically tries to avoid bankruptcy. "Our government is starving and hopelessly indebted," Keith told Total Wealth readers on May 31. "That's another way of saying it's desperate."

Keith's strategy isn't to rely on the government, but rather to navigate its policies in order to maximize profits. That's why he put together a simple chart to identify which kinds of investments should go into which kind of accounts.

For example, he advises putting master limited partnerships (MLPs) in regular taxable accounts instead of retirement accounts, lest you miss out on the various tax breaks that come with MLPs. On the other hand, Keith suggests putting high dividend stocks in retirement accounts "because the cold, hard cash that's kicked off as part of the dividend process is otherwise taxed at the regular income tax rate if you don't."

You can check out the chart - and more savvy ways to stay ahead of the government's attempts to take your money - right here.

Your missing the largest part of social security funding: the government will NOT be able to service its debt of +$20 trillion. An event could trigger it today or 10 years from now. But sooner or later: an increase in interest rates or foreigners balking at buying the bonds or faith in the U.S. dollar – and the house of cards comes tumbling down.

Then the U.S. will default in actuality or backdoor (money printing), and then the social security payments will be nothing or worth nothing.

Why not just reduce the tax for seniors so net pay equals the same.