As you know, we've been keeping our Money Morning readers up to date on developments in South and North Korea.

We do so because there's little doubt that these developments - even if they're playing out thousands of miles away - affect our lives in myriad ways, from our financial futures to our collective sense of national security.

You might remember that, on Tuesday, we explained why U.S. President Donald Trump and South Korean President Moon Jae In will need to reach a consensus in their summit today in order to fully exert a united front against the threat that is Kim Jong Un. 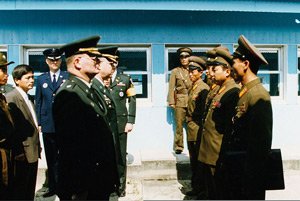 Not doing so, we wrote, would give North Korea the chance to continue honing its nuclear weapons arsenal.

But it looks like South Korea jumped the gun just this morning by proposing an offer to Pyongyang ahead of the Trump-Moon summit, perhaps in an attempt to sway the meeting's outcome.

South Korea Proposes a Peace Treaty with the North

"We have to get over the current unstable system of armistice and put an end to the war on the Korean Peninsula that has not yet ended," Chun said, according to Asian news outlet Channel News Asia.

The unstable armistice system Chun mentioned is the post-Korean War Armistice of 1953, which was supposed to have been replaced by a peace treaty, but never was.

This means that, technically, the two Koreas have been at war ever since.

But a peace treaty now - some 60 years later - could only be signed "at the stage of complete denuclearization of the North," Chun explained.

This surprise announcement hasn't fully caught up with American mainstream media yet. And there's been no word from the White House on this latest development.

But we have a possible reason for South Korea's pre-summit peace treaty proposal: to send a message of compliance to Kim Jong Un...

A North-South Korea Peace Treaty Removes America from the Equation

You see, Pyongyang has long demanded that in order for the North to roll back its weapons testing, American troops would have to leave the peninsula altogether.

Right now, 28,000 U.S. troops are stationed in South Korea as protection against the North's threats.

But a peace treaty between Seoul and Pyongyang could entail their departure.

Indeed, the public peace offering undermines the more hardline options of economic sanctions and military presence that the United States, Japan, and even China have espoused.

Whatever the reason behind South Korea's public consideration today, there's only one acceptable outcome as far as President Moon is concerned:

"Together with the nuclear dismantlement would come the establishment of a peace system on the Korean Peninsula," Moon said this morning, according to Channel News Asia, while on a plane en route to Washington D.C.

Meanwhile, President Trump's reaction to this diplomatic approach remains to be seen...

This small $6 U.S. defense firm with a new top-secret technology could help the Pentagon stop a Chinese sneak attack dead in its tracks. Read more...

An ASUMPTION based upon multiple, muted premises. It could work if in Principle the risk taken will be supported by the capacity to protect against betrayal. I want to do some thinking on this surprise development which is welcome on face, but still shrouded in mystery.. Conversation is not a useful substitute for sincere desire for cooperation and respectful co-existence! "Bring in the Clowns".