Saudi Aramco could be valued at $2 trillion, making the Saudi Aramco IPO worth a massive $100 billion. That will make it the biggest IPO ever once the company goes public. 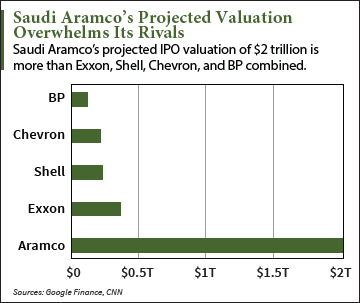 But the media is overlooking one key aspect of the Aramco IPO and is instead only focusing on the deal's size.

Even though Saudi Arabia is only selling a 5% stake in the company, it will still potentially raise $100 billion. That's more than four times the size of the current record set by Alibaba Group Holding Ltd. (NYSE: BABA) and its $25 billion 2014 IPO.

But Money Morning Global Energy Strategist Dr. Kent Moors says the valuation isn't the only thing that "makes the Aramco IPO uniquely important in the history of stock markets."

Moors - a 30-year veteran of advising countries and companies across the globe on energy policy - would certainly know.

Today, we're going to explain why Moors says investors need to look past the deal's size. We'll show you why the Aramco IPO is important for every investor, and include information on how to get Moors' profit strategy for the IPO.

The Saudi Aramco IPO Valuation Is Only Part of the Equation

Moors says the real story behind the Saudi Aramco IPO valuation is the money it will bring to the Saudi government - and what they'll do with it...

"When the dust clears from this one, a new sovereign wealth fund will be set up with as much as $2 trillion in purchasing power," said Moors. "Instantly, this will be the largest ever established."

This massive sovereign wealth fund will be a profit opportunity for investors who know where to look. The Saudi government isn't planning to leave the money in a bank; they are going to spend it. 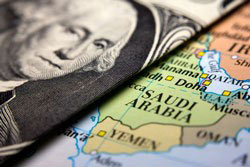 "This makes virtually any publicly traded company anywhere in the world suddenly a potential target for Saudi investment money," according to Moors.

What Moors calls the Saudi government's "novel idea" will be "one of the most interesting diversification programs ever attempted." And investors who have access to an energy insider like Moors will know where to look to reap the profits once the Aramco IPO date hits.

But there's still a major hurdle the Saudi government needs to clear, and it's holding up the Aramco IPO for now...