This list ranks gold dividend stocks in the mining sector by dividend yield. And it also includes one of our top gold stock recommendations of 2017...

Six of the 10 gold stocks listed above have posted negative returns so far in 2017. The main reason behind their losses has to do with gold price volatility.

The volatile price of gold this year is due to the overall strengthening U.S. economy. When the economy is strong, investors buy more stock instead of stashing money in safe-haven investments like gold and gold stocks.

According to the U.S. Department of Labor (DoL), the U.S. unemployment rate fell from 4.4% in April to 4.3% in May. That was the lowest level since 2001. Also, the DoL reported 138,000 jobs were added last month - a 1.6% increase from May 2016. That labor market strength was enough to allow the U.S. Federal Reserve to hike interest rates three times this year.

The strengthening economy and Fed rate hikes have led to three different gold price slumps and rebounds this year. 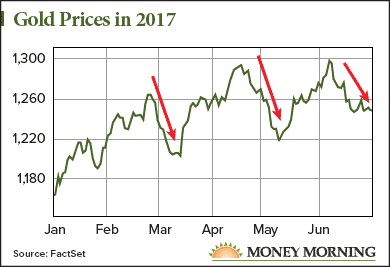 But despite any volatility in gold prices so far this year, gold dividend stocks are still strong income investments. Nine of the 10 companies in the list above haven't cut their dividends in 2017. In fact, Gold Fields Limited actually raised its quarterly dividend by 66.7% from $0.03 per share to $0.05 in March.

While we don't advise investing in just any gold stock with a generous dividend, one of the stocks listed above happens to be one of Money Morning Executive Editor Bill Patalon's favorite picks of the year. This company is one of the world's largest gold miners, and Thomson Reuters analysts predict its stock could rally as much as 69% in the next 12 months on top of its income-generating dividend.