The big silver news today (Friday, June 30) is how prices are on track for a 4% gain in the first half of the year despite falling for the second day in a row. We are still bullish on the metal's price in 2017. 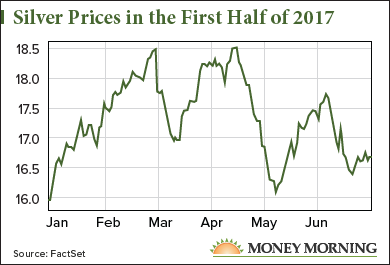 Today's silver price news came after the U.S. Federal Reserve reported that consumer spending growth slowed down last month. American consumer spending rose just 0.1% in May. That's down from back-to-back gains of 0.4% in both April and March.

Since inflation represents the general price increase of goods and services across the economy, low inflation typically means consumers will need to spend less money. Inflation fell to 1.9% in May from 2.2% in April, and the meager 0.1% consumer spending increase last month indicates inflation may be on track to keep falling in June.

But higher inflation can lead to higher silver prices. A high inflation rate leads observers to think the economy is weakening. After all, when prices on goods and services grow too high, people can't afford to buy them, which reduces economic activity. This threat of instability usually urges investors to buy safe-haven assets like silver, which boosts silver prices.

On the other hand, low inflation encourages consumer spending, since prices across the economy are lower. Over time, consumer spending can improve economic health by steadily raising prices, which ultimately leads back to high inflation.

Since a healthy economy usually means investors don't need safe-haven hedges like silver to protect their portfolio, low inflation ultimately reduces demand for silver and thus lowers the price of silver. That's why the weak consumer spending data from last month led to traders pushing down the price of silver.

But the lackluster consumer spending data is likely just short-term silver news that won't have a lasting negative effect on prices.

According to Money Morning Resource Specialist Peter Krauth, the price of silver could rally as much as 32.3% from today's $16.63 level to $22 per ounce by the end of the year. That means anyone who buys one ounce of the white metal today could be in for a 32.2% profit in just six months.

However, we have a way to make an even bigger return on silver. It's a silver stock that analysts say could gain as much as 52.9% over the next 12 months, making it a great way to invest in silver this year.

This Silver Stock Could Rise 52.9% Over the Next 12 Months