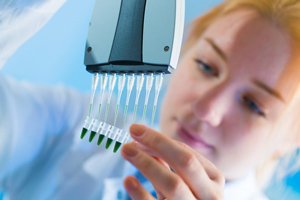 The U.S. Centers for Medicare & Medicaid Services estimate that biotech companies will double their spending on developing drugs from $310 billion in 2015 to $615 billion in 2025. Today, we're going to show you our guidelines for finding the best biotech stocks to buy now to profit from the biotech sector's $300 billion spending spree.

Over the more than 25 years he's been following the industry, Money Morning Biotech Investing Specialist Ernie Tremblay developed a system to pick the best biotech stocks.

We'll show you his five guidelines for picking biotech stocks, including three of his top biotech stocks to buy now. And one of his "must buy" biotech stocks has a growth potential of as much as 280% in the next 12 months...

5 Guidelines for Picking the Biotech Stocks to Buy Now

Guidelines for Investing in Biotech Stocks

If a company meets all of these guidelines, you can feel comfortable investing in it.
Next Step: Build your biotech portfolio with Tremblay’s easy-to-follow system…

Biotech Guideline, No. 1: The Company Needs a Strong Pipeline

A company should have a pipeline of several drugs in different stages of clinical trials to hedge against risks like failed clinical trials and generic drugs entering the market.

"New drugs take an average of eight years to get through the clinical trial process, and only one in five survives to the finish line," according to Tremblay. With this high failure rate, betting on one drug could ruin your biotech portfolio.

In the best-case scenario, a company should have several products in advanced stage clinical trials (phase 2 or after). This increases the chances that the company will receive approval from the U.S. Food and Drug Administration (FDA) for at least one treatment.

And no matter how promising a drug appears in the early developmental stages, you still need to make sure it is safe and effective before investing...

Biotech Guideline, No. 2: Safe and Effective Drugs Are Less Risky

Invest only in companies with safe and effective medications. It seems obvious, but in the excitement of a potential new drug discovery, it can be easy to overlook.

A way to make sure you know a drug is safe and effective is to wait until the company reports phase 2 trials.

But it's smart to wait even longer for drugs that treat cancer, Alzheimer's, or inflammatory bowel disease. Wait until these drugs report phase 3 results because they have a higher failure rate.

Only one out of every 20 drugs that begin trials for cancer treatment ultimately wins FDA approval, according to the National Cancer Institute. That failure rate is four times greater than general drugs, where one in five make it to FDA approval.

And all of these clinical trials take a lot of money to fund. That's why making sure the company has enough cash on hand to fund operations is crucial...

Biotech Guideline, No. 3: Examine the Cash Reserves and Burn Rate

Investors need to make sure that companies have plenty of cash on hand to fund operations. It's rare for a biotech company to make a profit so it relies on grants, debt, and other funding to bring new drugs to market.

You don't want the company to run out of cash before it secures its next round of funds. To make sure the company is in a sound financial situation, you want to evaluate the burn rate and determine how many months the company can survive on its existing cash reserves.

The burn rate is the average amount of money a biotech company goes through each month. To determine the burn rate, add cash flow from operations and capital expenditures together. If you added quarterly figures, divide the sum by three to get the monthly rate. If you utilized the annual figures, divide by 12.

Then the next guideline ensures the company has protected its new treatment in order to maximize its profits...

Biotech Guideline, No. 4: Patents and Grants for Market Exclusivity

Biotech companies need protection from competition for their newly developed drugs. The general rule of thumb is the higher the number of patents, the more protected the drug is from lower-priced generics.

Look for companies that have patents for how they manufacture the drugs, the molecule development, the design of the drug itself, its absorption by the body, and any other patents related to the drug.

Another type of protection to look for are FDA grants for exclusivity. The FDA grants exclusivity to encourage companies to take on important jobs, including new chemical formulas, testing "orphan drugs" (those for conditions that affect fewer than 200,000), conducting studies after a drug is approved, and pediatric studies for medications that have already been approved for adult use. These grants can last up to seven years and extend the time a company is protected from generic drug competition.

While all of these guidelines ensure a company is a sound investment, the next one can help you book double- and triple-digit profits...

Biotech Guideline, No. 5: Look for These Catalysts

The top biotech stocks will have catalysts that can drive the share price upward.

Catalysts are events that will make investors sit up and take notice. They include favorable study data, upcoming study report dates, and dates the FDA is slated to make decisions.

For example, if a company is set to release phase 2 study data with a firm release date of Sept. 15, that's a potential catalyst.

We've identified three biotech stocks that meet these five guidelines. The first company on our list of biotech stocks to buy is set to see its stock price rise 54% in the next 12 months...

UK-based GW Biotechnology Plc. (Nasdaq ADR: GWPH) is a global leader in researching and developing therapies based on the cannabinoid substance found in marijuana plants.

One of its drugs, Sativex, is used to treat multiple sclerosis (MS) spasms in 16 countries, but not in the United States. And the company is working on getting approval in 12 more countries in the next year.

Right now, the company has four drugs in a total of nine clinical trials. The company is testing the drugs for different FDA-approved uses. Three of these trials are in phase 3, checking off another guideline for picking biotech stocks.

GWPH currently has cash reserves worth four years of operating expenses, allowing it to continue funding its nine clinical trials.

Analysts have a consensus one-year price target of $154.00 for GWPH, which is 54% above current price of $100.66 per share. If its next drug, Epidiolex, receives FDA approval, the share price may go much higher than $154.

And the next two biotech stocks have even higher profit potential. One may gain as much as 176% and the other as much as 270%...