At least that's according to Charles Krauthammer, a Pulitzer Prize-winning Washington Post columnist well-known for his decades of experiencing reporting and commenting on U.S. foreign policy.

"Across 25 years and five administrations we have kicked the North Korean can down the road. We are now out of road."

And Krauthammer's latest prediction - published online last night (July 6) - is based on his belief that Uncle Sam has only two options left when it comes to countering North Korea:

It should be noted, however, that Krauthammer was quick to point out that this two-choice scenario in which the White House now finds itself isn't the current admin's fault.

It's the result of years of failed policies...

"Across 25 years and five administrations," Krauthammer said, "we have kicked the North Korean can down the road. We are now out of road."

He goes on to explain that multiple failed efforts to deter North Korea's nuclear program - with all these past admins equally to blame for never having effectively curbed it - culminated in the aggressive, weaponized Pyongyang we know today.

Krauthammer also suggested these administrations failed in that they didn't try to "deter" North Korea's chief ally, either...

"The latest North Korean [ICBM] is menacing not just because of its 4,000-mile range, but because it is road mobile. And the transporter comes from China," he wrote. "In the calculus of nuclear deterrence, mobility guarantees inviolability. (The enemy cannot find, and therefore cannot pre-empt, a mobile missile.) It's a huge step forward for Pyongyang. Supplied by Beijing."

On top of pointing out the U.S. government's historical failure to pressure China into not trading with North Korea, Krauthammer likewise decried Washington's repeated insistence that Beijing will one day step in to help...

"How many times must we be taught that Beijing does not share our view of denuclearizing North Korea? It prefers a divided peninsula, i.e., sustaining its client state as a guarantee against a unified Korea (possibly nuclear) allied with the West and sitting on its border," Krauthammer wrote.

Washington's many faults - its hope that China would step in, its failure in not pressuring China enough to step in, and its complacency with keeping up such a routine for nearly three decades - have left the U.S. with only two options now.

And It Can't Be War

"War is almost unthinkable, given the proximity of the 'Demilitarized Zone' to the 10 million people of Seoul, [South Korea]," Krauthammer wrote. "A mere conventional war would be devastating. And could rapidly go nuclear... which is why the most likely ultimate outcome, by far, is acquiescence." 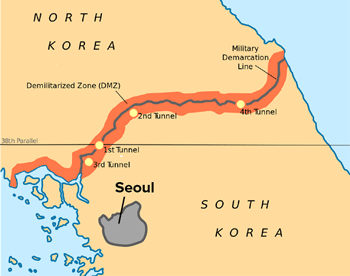 "Acquiescence" is not quite the tough approach President Donald Trump's White House has been touting... even if only with austere abstractions.

"I have some pretty severe things that we're thinking about," President Trump stated about the U.S.' response to North Korea's recent inter-continental ballistic missile (ICBM) launch.

Trump's Defense Secretary Jim "Mad Dog" Mattis has threatened the North as well - in a similarly indefinite manner of speaking.

In February, Mattis told a forum of South Korean legislators and media outlets in Seoul that "any attack on the United States, or our allies, will be defeated, and any use of nuclear weapons would be met with a response that would be effective and overwhelming."

But as far as Krauthammer is concerned, such vague statements are little more than time-buying excerpts of politico "diplo-speak."

The fact is: The U.S. has backed itself into a corner. Leaving Krauthammer's two options all that Uncle Sam has now to "unstick" itself...

"If a North Korean test missile goes off course and hits Japan or South Korea - then that's it: thermonuclear war," Keith said.

To add to this threat, he then explained that "if Kim Jong Un believes he's going to lose even for a second, he will push every button at his disposal. Even the button (controlling his nukes)."

And those lucky enough to live outside of North Korea's missile range wouldn't be immune to the damages. Such a war would wreak havoc on the global economy.

"If North Korea hit one of its neighbors, there would be panic-selling on a scale that no one's ever experienced," Keith warned. "Depending on how 'containable' the damage is."

For example, "if the damage is 'containable' - a clinical term even if there are millions of casualties - the markets will bottom quickly albeit probably at least 5% to 10% lower."

If the damage is "uncontainable," however, Fitz-Gerald recommends investors have their portfolios hedged ahead of time.

Hedging, by its very definition, means investors are engaging in protective behavior; they're not looking to sell everything. Rather, they're trying to put specific tools like inverse funds to work as a means of staying in the game.

Up Next: This secret test site in New Mexico will have skyscrapers, suburbs, parks, malls - even churches. But there's one thing you won't find: people. For the last few years, the businessmen and government contractors behind this $1 billion city with no people have been very close-lipped about it all. What exactly is going on there? Read More...