Congress members earning $174,000 a year have it so bad they can't afford to rent a place to stay in Washington to do the nation's business. 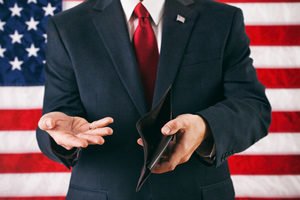 So one former Congressman - just-resigned Rep. Jason Chaffetz (R-Utah) - has proposed lawmakers get a taxpayer-funded $2,500 per month allowance to cover their housing expenses while in Washington.

(Chaffetz gave up his seat in Congress in the middle of his fifth term for a job as a Fox News contributor.)

That would effectively boost the typical congressional salary by $30,000 per year and, if extended to all 535 members, collectively cost taxpayers $16 million.

This proposal couldn't be any more tone deaf...

"Washington, D.C., is one of the most expensive places in the world, and I flat-out cannot afford a mortgage in Utah, kids in college, and a second place here in Washington, D.C.," Chaffetz told The Hill just days before his June 30 resignation. "I think a $2,500 housing allowance would be appropriate and a real help to have at least a decent quality of life in Washington if you're going to expect people to spend hundreds of nights a year here."

From the beginning of his first term in 2009, Chaffetz made a point of sleeping in his Capitol Hill office to keep from blowing his family budget. And he wasn't alone. Estimates put the number of Congress members bunking in their offices between 45 and 70.

Clearly, Chaffetz is far from the only lawmaker who thinks such largesse for a group that earns three times more than America's median household income makes sense. In fact, it's one of the rare ideas on Capitol Hill that has bipartisan support.

Rep. Alcee Hastings (D-FL.), who publicly complained in 2015 when the rent of his D.C. apartment increased from $2,100 to $3,100 a month, told The Hill last week that he agreed in principle with his departing Republican colleague. But he'd lower the monthly stipend to $1,700 a month to make the proposal less politically toxic.

Frankly, fear of voter backlash is just about the only thing holding Congress back from voting itself yet another perk.

At least they're not so dense as to imagine that taxpayers are shedding tears for their plight. The median U.S. household income is about $56,000, but many households live on far less.

Maybe the members of Congress could learn a thing or two about frugality from those they represent...

Members of Congress Need Some Lessons in Downsizing

It's true that most Americans don't need to maintain two homes, particularly when one of those homes is located in one of the most expensive housing regions in the country.

But lawmakers who think they can't pay for two homes on a salary of $174,000 a year are drunk on their own extravagant lifestyles.

First off, they don't need $2,500 a month for a modest Washington apartment - they're too busy to need anything fancy.

A look at Zillow shows that some apartments within walking distance of the Capitol do indeed go for $2,500 a month and up. But it's also not hard to find apartments priced at between $1,500 and $2,000.

And some two-bedroom units go for about $3,000 a month. Why not room with another lawmaker to cut costs? That's a basic strategy millions of Americans fall back on when trying to put a roof over their heads.

The other side of this equation is resources. According to the Center for Responsive Politics, the average net worth of a member of Congress is about $7 million, in addition to the $174,000 annual salary. More than half of all members are millionaires.

Let's look at the case of Jason Chaffetz, since he's put the spotlight on himself...

When You're Part of the 1%, You Don't Need Taxpayer Money