Just this morning, China warned the United States to stop the repeated calls for Beijing to put more pressure on North Korea. 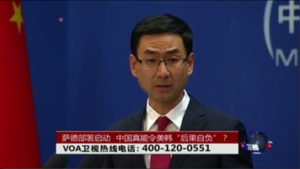 "Asking others to do work but doing nothing themselves is not OK," Chinese Foreign Ministry spokesperson Geng Shuang said in a daily news briefing today, according to Reuters.

"Being stabbed in the back is really not OK."

But he didn't need to…

China Warns the U.S. After President Trump Warns… and Threatens… and Tweets…

"Trade between China and North Korea grew almost 40% in the first quarter," the president tweeted on July 5. "So much for China working with us – but we had to give it a try!"

Then on July 8, at the recent G20 Summit, the president met briefly with Chinese President Xi Jinping, telling him, "Something must be done about [North Korea]" and promising, in no uncertain terms, "There will be a success… one way or the other," according to FOX News.

And just this past Sunday, on CBS News' "Face the Nation," U.S. Ambassador to the United Nations Nikki Haley stated, "President Donald Trump has made it clear to China that he will 'start looking' at trade relations if it did not help stop North Korea's aggressive behavior."

Haley's threat echoed one of Trump's 2016 campaign talking points – slapping China with massive trade tariffs on steel and other imported goods because he believed the country to be a "currency manipulator."

The renewed tariff warnings, however, pertain to China's refusal to fully cut economic ties with North Korea, which relies on Beijing for 90% of its oil, 80% of its consumer products, and 45% of its food through trade and aid.

China Warns the U.S. About Backstabbing an Ally

"I think this either shows lack of a full, correct knowledge of the issue, or there are ulterior motives for it, trying to shift responsibility," Foreign Ministry spokesperson Geng added this morning.

Geng insisted that China has been making unremitting efforts and has played a constructive role, but says that all parties have to meet each other halfway.

While Pyongyang's repeated nuclear and missile tests have angered Beijing, China also blames the United States and South Korea for making matters worse with their joint military exercises and with the THAAD missile defense system installation.

Everyone needs to accept responsibility to curb North Korea's aggression, Geng told members of the Chinese press, before adding, "The 'China responsibility theory' on the peninsula nuclear issue can stop."