If you do enough research on penny stock investing, you're bound to run across several alarming stories of penny stock scams. That's because they're actually common, with over 1,300 stocks suspended from trading between 2012 and 2014 for fraud investigations, according to The Wall Street Journal.

We'll show you how a recent penny stock scam worked, plus how to avoid scams with our expert's small-cap stock recommendation...

In many cases, penny stock scams involve "pump-and-dump" tactics. A pump-and-dump scam is when a dishonest business owner or stock promoter will buy up millions of shares in a nearly worthless company. Sometimes, the business is a complete fraud or shell company with no physical assets.

Then, they begin spreading false statements about the stock's profit potential. They promote the stock through a variety of methods like social media, e-mail, or mailed brochures.

All of this new attention will create excitement and lead unwitting investors to buy shares, driving up the stock price. After that, the scammers will dump all of their shares at the newly inflated price, while investors lured in by the promotions will be left with losses.

And one of these schemes just happened three years ago and involved a notorious con artist who has been sentenced to 12 years in prison... 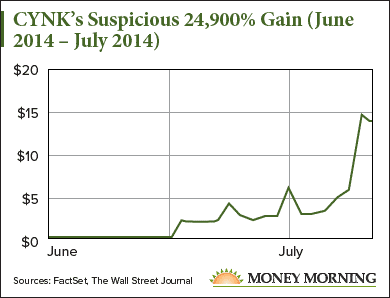 The SEC probe into Cynk Technology found that the firm was dormant from its creation in 2008 to 2012 when it filed to go public. It claimed to be a social media network that would compete with the likes of LinkedIn Corp. (NYSE: LNKD) and Facebook Inc. (Nasdaq: FB). The company's angle was that it would sell users introductions to major business contacts and celebrities, bypassing the need to "network" for professional connections.

The probe also found that Cynk was nothing more than a shell company. It never made any revenue or had any physical assets on record. The company's only purpose was to create a $300 million pump-and-dump that involved at least 100 investors.

In 2015, U.S. investigators conducted a sting on Cynk's so-called headquarters in Belize, where they arrested six Belizean residents and one Canadian citizen.

But the leader of the penny stock scam is a man named Gregg Mulholland...

Mulholland is a California stock promoter that arranged a network of investors for the purpose of manipulating CYNK's stock price for his own profit. Once the heavily promoted CYNK lured enough buyers, he sold his shares at the inflated price for a profit upward of $300 million.

Mulholland was arrested in June 2015 and pled guilty to money laundering and stock fraud. In February, Mulholland was sentenced to 12 years in prison for his role in the Cynk penny stock scandal.

Despite hearing about penny stock pump-and-dump scams like this, not every tiny company is dangerous. You just have to do your homework and research the company's financials, including digging into annual 10-K filings and quarterly earnings reports. These will tell you if penny stocks are fraudulent by showing you whether the company is legitimate and profitable or not.

But Money Morning Small-Cap Specialist Sid Riggs likes to do the research for you...

In fact, he recently found a company that has crushed analyst expectations four quarters in a row by an average of 57.6%. This indicates the stock is undervalued by Wall Street right now.

One of the Best Small-Cap Stocks to Buy This Year