The U.S. military knew about North Korea's latest missile launch before it happened, according to Asia-Pacific media outlet The Diplomat.

The theory goes that U.S. forces were within striking distance of the launch site of North Korea's ICBM (intercontinental ballistic missile) on July 4 – the day the long-range missile launch rattled Americans from the midst of holiday festivities.

In fact, according to the UK's Business Insider, the United States even had a "kill shot" on Kim Jong Un. But the military forces didn't stop the launch or shoot Pyongyang's leader for one key reason:

They wanted to send him a message. 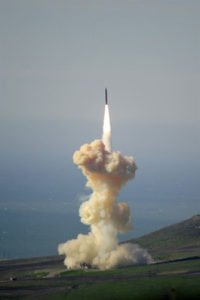 According to Money Morning Executive Editor Bill Patalon, the reason U.S. military troops would have held their fire this past Independence Day would be to send a message to Kim Jong Un – basically saying, "we were there, and you're alive by our good graces."

Bill, who's been following North Korea's weapons program since 2013, likens this theory to the baseball term "chin music."

Chin music happens when a fast pitch whooshes by just under a batter's jawline. One inch to the right or left and the batter's face would be pulverized.

It's an aggression tactic on the pitcher's part – one that sends a clear message:

"By admitting we watched the launch," Bill writes, "the Pentagon is telling North Korea the same thing. It's saying, 'Don't dig in. Back off. Otherwise, the next pitch we throw your way will be in your ear.'"

In fact, the top U.S. commander in the Pacific, Admiral Harry Harris, espoused this tactic in a recent statement.

On April 26, Harris said the United States wanted "to bring Kim Jong Un to his senses, not his knees," BBC reported.

Throwing a proverbial ball across Kim Jong Un's jawline isn't the only way that the United States plans to bring the North Korean dictator to his senses. In response to the North Korean ICBM launch, Secretary of State Rex Tillerson said America would "enact stronger measures" against Pyongyang, adding that Washington would never accept it as a nuclear power.

In May, Boeing revealed that it's working with the Defense Advanced Research Projects Agency (DARPA) to develop a space drone for the U.S. military capable of running key "errands" – like scrambling satellite signals, for example.

The craft will be called "The Phantom Express."

And thanks to Boeing's consistent innovation and development, its share price hit a new all-time high of $206.48 just yesterday (July 11).

Now investors are rushing to get in on the profits.

But many of Bill's Private Briefing subscribers have already pocketed winnings to the tune of 233%.

That's because Bill first recommended Boeing in 2011, when the stock was trading at $61.92.

Bill's Private Briefing portfolio has several other lucrative defense picks as well. Click here to reap the rewards yourself…