It's bad enough that some investors view initial coin offerings (ICOs) as a digital get-rich-quick strategy.

But it's irresponsible for the nation's most-trusted investing publication to encourage this idea. 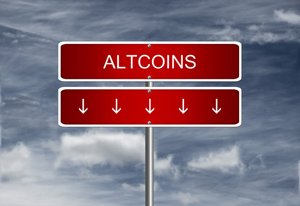 On July 7, WSJ ran a story on its website with the headline, "Forget an IPO, Coin Offerings Are New Road to Startup Riches."

The story notes that ICOs have already raised $1 billion in 2017. The first quote, from a Silicon Valley lawyer who advises startups on how to structure their coin offerings, is "It's very hot right now."

The label on one of the charts, which shows the amounts raised by the biggest ICOs so far this year, is "Ka-ching." Another chart showing the increase in ICO amounts raised by year is labeled "Virtual Bonanza."

Reporter Paul Vigna waits until a third of the way through the story to point out the risks, but only spends just four paragraphs on them before returning to more examples of ICO successes.

Here's why WSJ's rosy portrayal of ICOs is so troubling...

Initial Coin Offerings Have Been Hammered This Year

While Vigna focuses a great deal on the extraordinary amounts of money that ICOs have raised - several recent ones have brought in more than $100 million - he fails to point out that most of the cryptocurrencies launched with ICOs this year have plummeted in value. 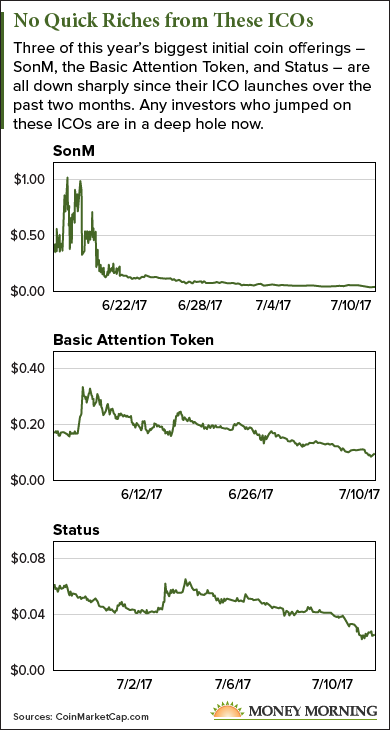 One cryptocurrency, SonM, raised $42 million in its June 16 ICO. The concept behind it is to use cryptocurrency to create a cloud-based computing platform. But since then, its SNM token has cratered 90% in value, from $0.42 per coin to $0.04.

The Status ICO on June 28 raised an impressive $90 million. Status is a messaging platform that aims to link Ethereum's decentralized applications (Dapps) to other widely used platforms, such as Android and iOS. A compelling concept, but the SNT token has plunged 59% in less than two weeks.

Another highly anticipated ICO, the Basic Attention Token (BAT), raised $35 million in its June 1 ICO. These tokens are intended to integrate with the Brave web browser - a pretty good idea from an established operation. But the BAT cryptocurrency is down nearly 45%.

While ICOs have great potential as a way to crowdfund startups based on digital currencies and the blockchain, this form of investing is very new territory.

It's easy for investors to look at the huge increases in the price of Bitcoin and price of Ethereum and think they need only "get in on the ground floor" of any new cryptocurrency to become rich practically overnight.

But the reality is a lot more complicated...

What is really happening is rags that get paid to pump garbage penny stocks are threatening their profits. You will hear many entities slamming crypto currencies. They are the future of contracts and exchange of value. The fiat centalized monopoly is in panic mode. An attempt to discredit, centralize, and tax and control will reach a feverish level. Governments, financial institutions are unable to create anything comparable as the profits for them will not be acheivable.
The fact of the matter is, unless all computers are unplugged and or Internet censored which will never happen crypto is here to stay.
When investing in crypto, I strongly recommending researching the development and support team behind each offering. I would also question does the coin serve a useful function at a dramatic reduction in speed, efficiency, costs of existing technology. If privacy is what you value then look into the blockchain itself and determine if it meets your needs.
To catagorize all ALT coin ICO as garbage is unprofessional, insincere and just a means to protect the meal tickets they are accustomed to.