Ethereum prices are down by 26.21% since July 1, and three recent events are responsible for the double-digit Ethereum price drop. 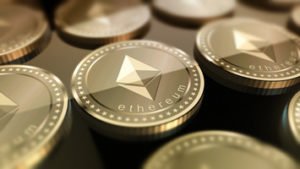 But Money Morning readers shouldn't panic. These three events were just temporary pullbacks for the cryptocurrency. In fact, some analysts see Ethereum prices climbing to $500 by the end of 2017.

Here's a closer look at the three events that are temporarily causing Ethereum prices to fall, plus where we see the price of the digital currency heading next…

On June 21, 2017, an Ethereum "flash crash" sent cryptocurrency investors into a full-fledged panic.

On the GDAX, an exchange that allows investors to buy and sell digital currencies, the Ethereum price plummeted from $319 to a low of just $0.10.

The sell-off was caused by a multimillion-dollar sell order that triggered 800 stop losses.

GDAX Vice President Adam White wrote in a June 21 blog post that there were no indications of wrongdoing, but the crash still diminished investor confidence in Ethereum.

Unfortunately for cryptocurrency investors, there was another event less than a week later that caused another price dip…

Ethereum Prices Dropped Again on June 25 Thanks to Online Rumors

The false rumor stated Vitalik Buterin, the creator of Ethereum, had died in a fatal car crash. Once again, this caused some cryptocurrency traders to panic.

After learning about the rumor, Vitalik took to Twitter Inc. (NYSE: TWTR) to dispel it with a picture of himself, alive and well. The Ethereum price rebounded just before midnight to $303.25 by the end of June 25, but that was still a loss of 6.25% on the day.

On top of the flash crash and death rumor, some investors are also losing faith in all digital currencies because of initial coin offerings (ICOs)…

Volatile ICOs Cause Some Investors to Lose Faith in Cryptocurrencies

ICOs are fundraising tools that trade newly created cryptocurrencies in exchange for current digital currency, according to TechCrunch.

For example, investors can exchange Bitcoin or Ethereum for a newly created "coin."

In theory, ICOs are supposed to help companies and investors. Startups raise money, and investors receive access to new digital tokens that could rise in value. ICOs are tied to the company, which means if the company is successful, the tokens become more valuable.

How to Buy Bitcoins- Your Guide to Digital Profits

This Media Praise for Initial Coin Offerings Is Dangerous

However, the token prices from some recent ICOs have plummeted in value, damaging the image of the entire digital currency market for some investors.

These three events may have caused some investors to lose confidence in the digital currency. As you can see in the accompanying chart, Ethereum prices have had a rocky start to the month of July. 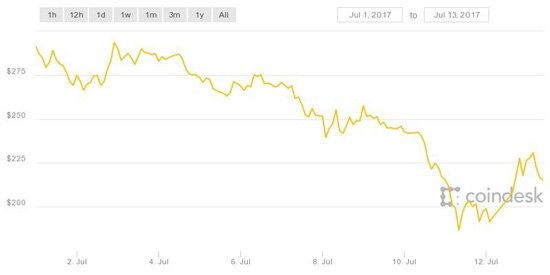 But what our readers need to remember is Ethereum prices are still near all-time highs.

Over the last 12 months, the Ethereum price has skyrocketed more than 1,900%.

And despite the short-term sell-offs, prices could continue to climb and reach a $500 price target by the end of 2017.

Here's everything you need to know about this bold Ethereum price prediction.