And that's just part of a larger industry shift away from coal that investors can profit from right now... 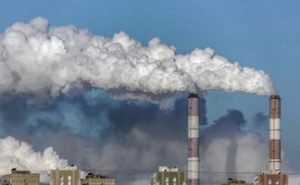 We told Money Morning readers about Southern Company's $7.1 billion mistake back in February. At the time, the coal plant was already $5.3 billion over budget and four years behind schedule.

Southern Company's disaster shouldn't have come as a surprise. Coal made up 50% of all electricity production in 2007. Now it's fallen to just 30%, while natural gas has overtaken it with 31%.

We'll show you why natural gas is now king and why the trend that ended Southern Company's plan could result in you banking 70% gains...

Coal production has dropped 37% over the last decade, while natural gas production rose 45% in the same time. There are two crucial reasons why natural gas is better than coal now. 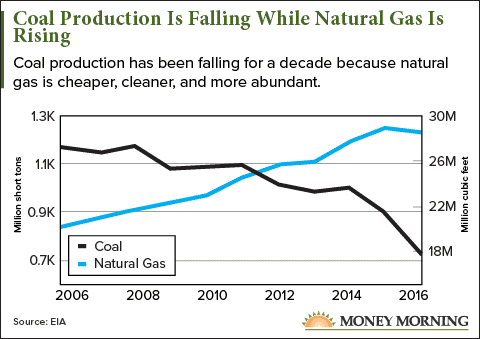 The U.S. Energy Information Administration estimates coal will double the cost of natural gas as a fuel for new electricity generation in 2022.

Natural gas is much cheaper for electricity generation because it's easier to transport and hook up at a power plant. Natural gas can be piped directly to the plant and requires no additional processing to turn into fuel.

Coal, on the other hand, must be delivered by train or truck. Once coal is burned for power, the ash remnants have to be cleaned up and transported away.

And for clean coal plants, the technology used to capture carbon emissions is expensive to install and is still considered an "unproven technology."

On top of the unreliable technology needed to make coal clean, natural gas has become more abundant, and cheaper, over the last decade...

Second, natural gas is more abundant than ever thanks to fracking.

Hydraulic fracturing, or fracking, allows companies to access natural gas deposits in underground shale formations that were previously unrecoverable. The process injects a combination of water and chemicals into shale deposits to expand the rock formations and allow natural gas to escape.

Natural gas production began to soar starting in 2008 when fracking opened up the Marcellus shale play - the largest natural gas deposit in the United States with 141 trillion cubic feet of recoverable gas. Between 2005 and 2015, natural gas produced from shale skyrocketed by over 500% thanks to fracking. 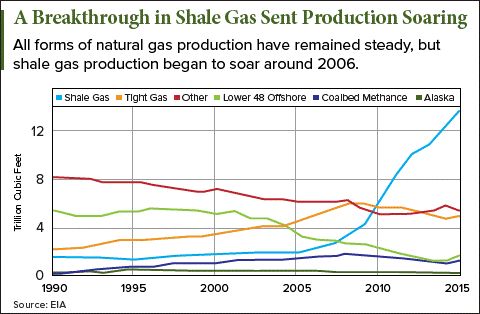 The abundance of natural gas makes it easier than ever for electricity-generating plants to get access to the fuel, and it's made natural gas cheaper too. That's another reason Southern Company's clean coal plant is switching to natural gas even though it sits adjacent to a coal mine.

Natural gas prices have plummeted 69% since 2008, when fracking became popular.

Southern Company's failed attempt to make coal work is a warning sign to investors that coal isn't coming back. But natural gas' boom is a profit opportunity for investors.

In fact, we've found an energy stock that lets you profit from the transition from coal to natural gas.

And Wall Street analysts project this stock's share price could rise 69% over the next 12 months...