Gold prices are modestly up in pre-U.S. day trading on more short covering and bargain hunting after hitting a four-month low earlier this week.

The key U.S. economic report today is the producer price index for June, which is expected to come in unchanged from May.

Yellen speaks again today in front of the U.S. Senate. The question-and-answer session will be monitored closely, but her remarks to the Senate are likely to be the same as those to the House members on Wednesday.

In overnight news, it was reported that China's exports rose by 11.3% in June, from the same period last year, while its imports rose by 17.2% in that timeframe. Those numbers were slightly above market expectations.

The "outside markets" on Thursday morning see Nymex crude oil futures slightly lower and trading just above $45.00 a barrel. An IEA report out today said world oil demand is on the rise. The crude oil market bears remain in firm near-term technical control.

Meantime, the U.S. dollar index is slightly higher early today, but gains are limited by the more dovish tone on U.S. monetary policy delivered by Yellen in her remarks on Wednesday. The greenback bears have the firm near-term technical advantage amid a price downtrend. 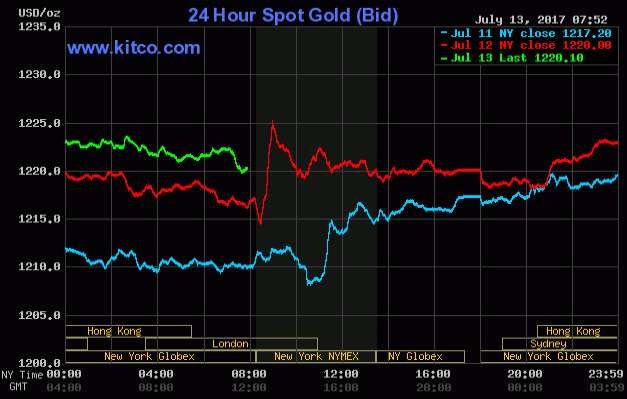 Other U.S. economic data due for release Thursday includes the weekly jobless claims report and the monthly Treasury budget statement.

5677 Reads
Should I Sell My Stocks as the Coronavirus Hammers the Market?
The coronavirus has created a massive selloff in the markets, but is now the time to sell your stocks? Here's what you need to know now...