The Bitcoin price is falling again, zapped by the one-two-punch of an overall decline in cryptocurrency prices and a looming deadline in the long-running Bitcoin civil war. 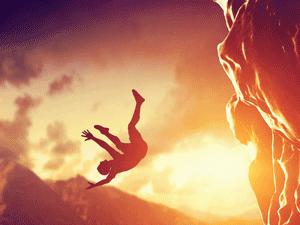 And Bitcoin wasn't the only cryptocurrency taking a hit this week. The No. 2 digital currency, Ethereum, has plunged 33% over the past week to below $200. It's now more than 50% below its mid-June high of just over $400.

Many other cryptocurrencies, including several launched via initial coin offerings (ICOs) over the past few months, are down 50% or more since mid-June. 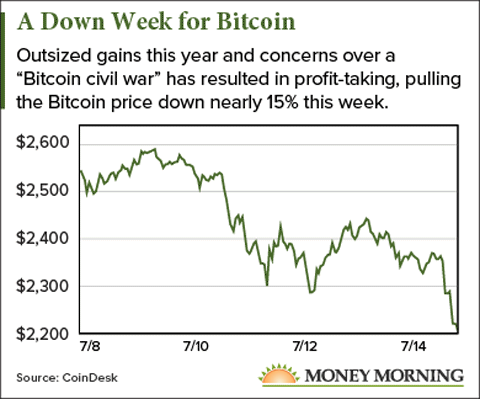 Frankly, this large-scale pullback should have been expected.

Just about every significant cryptocurrency experienced huge gains through the first five months of this year. Bitcoin tripled in price, and the Ethereum price was up as much as 5,000%. Ripple was up 6,000% at one point in mid-May.

Any asset that shoots up that far that fast is bound to have some sort of crash. It doesn't mean cryptocurrencies are doomed, but a lot of froth needs to be blown off.

And even with the recent declines, cryptocurrencies have big gains on the year. The price of Bitcoin is up about 125% year to date. Ethereum is still up more than 2,000%.

That suggests cryptocurrency prices could continue falling in the days ahead.

But the deflating price bubble is only half the story.

Bitcoin's internal debate over how best to scale the cryptocurrency is coming up on a deadline in two weeks that will either resolve the issue or tear the community in half...

Bitcoin is at a crossroads now. The number of daily transactions has grown to the point where the network has reached capacity.

Unless something is done soon, transactions suffer from longer and longer delays. Users can prioritize their transaction by choosing to pay a higher fee to the Bitcoin miners, but that will result in escalating fees. Before long, Bitcoin's costs would rise to the point where using the digital currency would become impractical.

Nearly everyone in the Bitcoin community agrees some sort of scaling solution is needed. But they vehemently disagree on which path is the right one. And the growing uncertainty over how that debate gets resolved has put increasing pressure on the Bitcoin price.

The other side prefers an adjustment to the code that would squeeze more transactions into each block while keeping the block size at one megabyte. Called "Segregated Witness," or "SegWit" for short, this solution would only increase network capacity by about 30%.

The pros and cons of both solutions can be debated (and have been, endlessly), but the bigger problem is that both sides have dug in their heels over the past two years. Each side believes its way is the only way forward and the other side is evil - a true Bitcoin civil war.

But a few months ago, frustrated peacemakers came up with what they'd hoped would be a compromise...

A Possible Truce in the Bitcoin Civil War

Very nice story. Did you sit in on the live Ethereum meeting today? Did not think so. Pissing matches within the communities drive much of the pricing. As long as the function of the chains are still being improved and security weaknesses addressed, Crypto will remain best investment over crap penny pump and dumps…

Two sides arguing while the ship is sinking. Both sides are wrong. The very buzzword "Blockchain" that crypto pumpers are selling is the problem. The blockchain containing the entire history is growing bigger and slower every year, over 100 Gigabytes in size now. It doubled in size the last year.

Storing the entire history of a currency is stupid. Imagine a huge filing cabinet attached to a dime that grows every time you spend a dime. A huge growing baggage attached to every coin. You would end up with your pants down at your ankles and not be able to walk.

Cryptos are basically flawed. Cryptos need to record the history, but at the same time it is also the very growing baggage that is dragging it down.