Here at Money Morning, we work with a team of 11 investing and market professionals who have invested real money for themselves and others over the decades they've spent in their respective fields.

In fact, as a group, these folks have close to 300 years of boots-on-the-ground experience in energy markets, global investing, precious metals and resources, technology investing and venture capital, and trading.

And their recommendations have been profitable indeed.

Here are 10 of their very best picks. We always say we'll put our editors' research up against Wall Street's best anytime, and you'll see in a minute that these stocks have crushed the S&P 500's returns over the same time frame.

Here are three of the best, and you'll get a chance to check out the entire list a little further down - there's still a lot of upside left to run.

Some of Our Biggest Recommendations Ever

Bill has re-recommended Galapagos several times over the years, and each time the recommendation has preceded another bout of big profits. That's why in 2016 he said it has "an established history of piling on gains" - an average of 110% a year, in fact.

You can learn how to get all of Bill's recommendations every day, just like his paid-up subscribers, right here.

But Kent knew it wasn't done rising. He saw a "nice pop in share value" ahead as natural gas demand grew, and he was right - only that "pop" turned out to be a stratospheric rocket rider. Cheniere has risen 367.5% since then, compared to an S&P rise of 97.3%. Cheniere remains a leader in the natural gas industry. Kent's about much more than oil and gas, though. Right now, he's tracking a revolutionary "alternative" fuel source that could be worth $7 .2 trillion soon. You can check out his research here.

Right now, Michael's looking at some of the most potentially lucrative legal cannabis stock plays on the market. He says that's the one industry today with the innovation and drive that reminds him of the small Silicon Valley "upstarts" he covered back in the 1980s, like Apple Inc. You can learn how to get his list of the best 30 pot stocks right here.

Here's the full top 10 list of our most market-crushing stock picks, with performance measured as of the end of June 2017.

Any investor would do really well to go out and buy these today - as I said, don't let the huge gains already on the books put you off, because there's still plenty of upside to go. 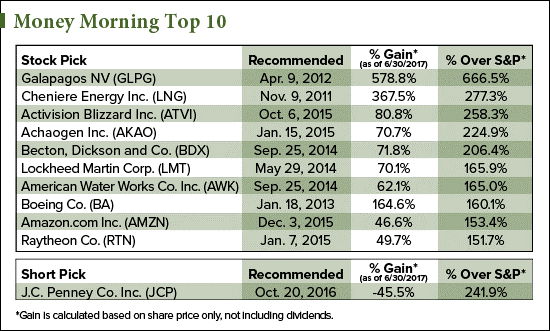 Now that you've seen just a little of what we do here, you're invited to learn a bit more about our flagship monthly service, the Money Map Report. Money Morning Chief Investment Strategist Keith Fitz-Gerald headlines it with a high-profit recommendation every month, and you'll hear from some of our editors, too, about the stocks they're looking at. Lots of the picks you've seen here appeared in the Money Map Report first. Right now, Keith is looking at one of the most potentially profitable U.S. market trends of the year. Click here to learn more...

Good morning,
Interesting to see this. Very new in this type of investing. I am interested in the pot stocks and penny stocks. Could I be getting that help from here?