North Korea is about to test a submarine-based missile launch - a test that makes the Hermit Kingdom all the more dangerous. And we called it.

Back in March, we warned readers about how dangerous it was for the Pentagon to repeatedly dismiss North Korea's weapons advancements. 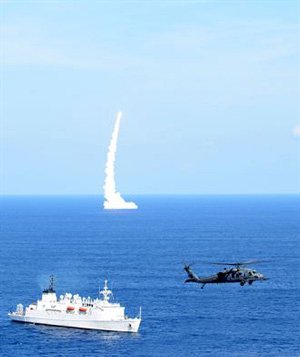 That's because sub-launched ballistic missiles (SLBMS) require only a quick boost of cold pressure from the vessel's engines to be flung far out into the ocean.

From there, the missile fires upward to travel the rest of the way toward mainland U.S.A.

Not surprisingly, Bill was right to be cautious.

Just this morning, news broke that North Korea has sent a missile-laden submarine into the deep water region due east, in the Sea of Japan...

A North Korea Sub Is Sniffing Around the Pacific... Again

You see, this isn't Pyongyang's first SLBM test. North Korea conducted its first successful SLBM test in August 2016, when it launched the Pukkuksong-1 missile from waters near Japan.

The missile was fired at a high angle, South Korea's Yonhap News Agency reported on Aug. 23, and still breached 500 kilometers. While the media outlet couldn't tell the weapon's exact range that day, the test indicated that it could potentially hit the United States if fired at a lower trajectory.

"'The distance indicated the North's push to develop a submarine-launched missile system was paying off,' officials and experts said," Reuters added on Aug. 26.

But the Pentagon's response to that particular test was a mere finger-wagging...

"We're not going to predict the future, but we would welcome steps by North Korea to ease tensions and to not take these kinds of provocative actions," Pentagon spokesman Peter Cook said during a press briefing the day of the launch, according to Business Insider.

Bill told readers in March, however, that the Pentagon had secretly been shocked by North Korea's SLBM test last August.

"The Pentagon's ability to be so shocked is another concern in and of itself," he added, "since that wouldn't be the case if Washington had consistently been paying better attention to Pyongyang's developments all along."

The U.S. Has Its Eyes on Suspicious Activities

The sub in question appeared to be 65 meters long, and it had sailed 62 miles out into international waters in the Sea of Japan, further than any such vessel had ever gone before.

Meanwhile, alert levels in the region have been raised in case of a possible missile launch.

And U.S. military troops - all 30,000 of them - are on standby in South Korea, at the ready should Pyongyang test another weapon.

As Tensions Rise, the Pentagon Is Turning to Tech

As far as the Pentagon's projected reaction to yet another test, the institution's actions recently indicate it's indeed starting to take North Korea's nuclear threats more seriously.

So protective steps are being made.

There's even technological progress being made on the "foot-soldier front" as well.

For example, the U.S. Navy has been testing an electromagnetic railgun capable of firing a shell weighing 10 kilograms up to 5,400 mph. The blast from this weapon is so powerful that it instantly creates a sonic boom from breaking the sound barrier.

The Department of Defense has likewise been testing "smart bullets" with facial recognition technology, making it virtually impossible for a military sniper to miss a target.

And then there's the "Virtual Eye"...

Currently, the Defense Advanced Research Projects Agency (DARPA) is testing a "virtual eye" for soldiers to use that would allow them to virtually assess an environment before sending humans in.

The innovation will be a literal lifesaver.

And Nvidia Corp. (Nasdaq: NVDA) is providing the tool's most powerful component: the chip - a.k.a. "the brain" - of the device.

Bill recommended Nvidia to his Private Briefing subscribers in June 2013 when it was $14.44.

And that's just one of several stock picks Bill's readers are profiting from.