Yesterday, the Hermit Kingdom launched a tourism website clearly designed to attract foreigners to its country. Ironically, the second language option on the site (after Korean) is English.

The tourism page was launched exactly one month after the death of American university student Otto Warmbier, who had been arrested in North Korea in 2016 for trying to steal a propaganda sign. Warmbier was returned to the United States in a coma in June and died a week later.

The site, according to its mission statement, was built to "promote mutual understanding and cultural bonds between people around the world and develop the national economy." 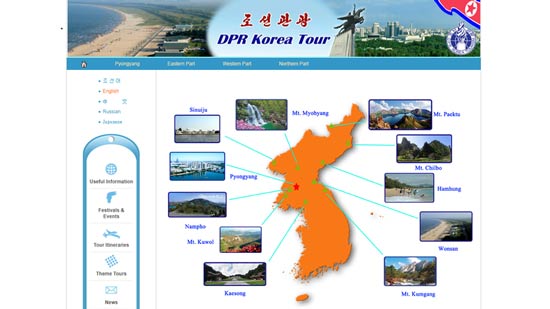 Main page of North Korea's new English-language tourism website, tourismdprk.gov.kp. The map shows both North and South Korea without a border, but only highlights the attractions in the North.

Available for visitors to North Korea, according to the webpage:

Perhaps not surprisingly, several skeptics have emerged since the site surfaced who believe Pyongyang's fresh tourism push has an ulterior motive…

"At least 16 Americans have been arrested by North Korean authorities in the past decade," reported NPR yesterday, quoting U.S. Department of State statistics, "and that includes 'those who traveled independently and those who were part of organized tours.'"

Now that the tourism website has emerged, the U.S. government is allegedly set to ban travel to North Korea altogether, the BBC reported yesterday.

The Department of State has not confirmed this news, however.

We've been covering the myriad dangers posed by North Korea for years now, and much of our expert insight comes from Money Morning Executive Editor Bill Patalon, III.

Bill has been following developments in the "Asian arms race" for over three decades. He alerted his Private Briefing subscribers to the dangers of the rising tensions in the South China Sea in 2012 – years before the mainstream media picked up on it.

Bill also wrote that North Korea was working on advanced technologies such as sub-launched ballistic missiles (SLBMs) and electro-magnetic pulse (EMP) weapons while the U.S. Pentagon sat twiddling its fingers.

And on top of all that, Bill has given his readers incredible profit opportunities within the chaos.

For example, Bill recommended Lockheed Martin Corp. (NYSE: LMT) in November 2013. He noted the varying projects that LMT was involved with, including the construction of U.S. spy planes and the U.S. Department of Defense's construction of its THAAD anti-missile defense system.

Since his initial recommendation, Lockheed shares have gone up well over 100%.

And Bill has several more recommendations currently beating the S&P 500.

Have a look at his latest stock picks in his Private Briefing subscription service by clicking here.