The number of distressed retailers on Moody's ratings list just topped 22 - three higher than the 19 recorded at the peak of the Great Recession. 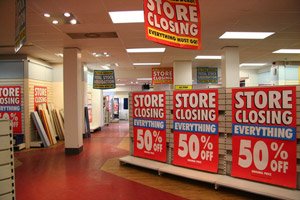 In fact, Moody's list is expected to grow over the next 12 to 18 months, the rating agency said on June 7.

The decline of brick-and-mortar retailers is happening - and happening fast.

What's more, Money Morning Capital Wave Strategist - and "Retail Ice Age" expert - Shah Gilani estimates 50 companies will be filing for bankruptcy this year or the next.

And these five retailers are on track to be among them.

Specialty apparel retailer J. Crew tried to woo over millennials by completely changing their merchandise strategy. Instead of its usual mid-tier preppy basics, the store positioned itself as upscale - and changed its prices to reflect it.

"We gave a perception of being a higher-priced company than we were - in our catalog, online, and in our general presentation," said CEO Mickey Drexler to The Wall Street Journal on May 24. "Very big mistake."

The move sent the company spiraling.

J.Crew's total sales fell 6% to $2 billion last year, and same-store sales dropped 8% following a decrease of 10% the prior year.

The company has more than $2 billion of debt and less than $150 million in cash, making it unlikely to survive the rest of the year without filing for bankruptcy protection.

Eddie Bauer is no stranger to bankruptcy.

In fact, the outdoor apparel retailer has survived not one, but two trips to bankruptcy court since 2003.

The clothing company has been called the "perfect poster child" of what Chapter 11 is designed to be by U.S. bankruptcy Judge Burton Lifland.

If you're a company, that's not a title you brag about.

But it looks like the company may be headed that way yet again...

Over the past 12 months, Eddie Bauer has seen revenue decline and lower gross margins, according to credit ratings agency Moody's. What's more, both Moody's and Standard & Poor's have warned that the company may have to rely on borrowings to fund working capital needs and interest expense if it wants to survive in the near term. 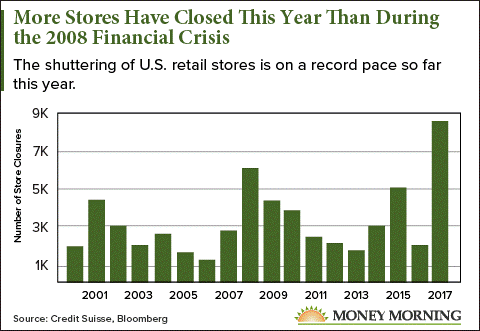 Women's fashion icon Nine West is in some serious trouble.

Moreover, the company's retail operations have been slipping for quite some time, and the company operates in a "challenged, moderate price department store sector which we believe will make revenue growth difficult," Moody's analysts wrote in March.

Not only is the company losing market share, but it is also drowning in a sea of debt.

According to the Standard & Poor's website, this rating means "in the event of adverse business, financial, or economic conditions, the obligor is not likely to have the capacity to meet its financial commitments on the obligation."

In other words, if anything goes wrong, the next step for Nine West is bankruptcy.

The queen of costume jewelry and ear piercing closed 166 stores last year - and is set to close even more.

The retailer has reported 11 consecutive quarters of declining sales. Just let that sink in.

"It's mass destruction at American malls, and Claire's is right in the middle of it," reported The Washington Post on June 26. "Claire's, which at one time was the most profitable chain in the business, has become a complete train wreck."

"Claire's - which is about impulse-driven purchases - has become a victim of changing mall traffic trends," said David Silverman, a retail analyst at Fitch Ratings, to The Post.

Perhaps the greatest example of the perils of the "Retail Ice Age" is Sears.

The once-great American retailer has closed over 250 stores within the past year and issued hundreds of layoffs.

And it's only getting worse for Sears - it just announced 43 more store closures on July 7 in addition to the 300 additional closures planned for this year.

Not surprisingly, SHLD stock is completely in the toilet. Since this time last year (July), SHLD stock has fallen a whopping 33.68%.

In fact, Sears' stock has gotten so bad that its employees are suing the company just for including the stock as an option on employees' 401(k)s.

Shah told readers back in May about Sears' epic downfall - and how to play it for big gains as it "lurches towards its deathbed."

Those who listened to him minted a nice 39.35% gain in just a little over one month by shorting Sears. And you could do the same thing. That is, if you know what you're doing.

But as deadly as this may be for the companies involved, it's a huge profit opportunity for investors.

Investors could make a ton of money on other dying retail stocks as they fall to their graves - you just have to know how to play them.

You see, retail stocks are expensive and risky. But Shah has uncovered a way to make colossal profits on them.

Right now, he has a list of 40 retail stocks that are scheduled for termination. And he's ready to show you how you can make $100,000 from every single one of them - all in a matter of weeks.

Retail Companies Are Slashing Jobs Like We're in a Recession

Inside the 5 Largest Chapter 11 Bankruptcy Filings in U.S. History

The Slow Death of American Icon Sears - and Who's Next