The price of gold's rally this week to its highest level since June 23 came mostly on the back of comments from Mario Draghi, president of the European Central Bank (ECB). Draghi said during the bank's policy meeting on Thursday that the ECB had not yet formalized plans to roll back monetary policy stimulus.

The Bank of Japan (BoJ) also said its inflation expectations were not meeting targets, with the current 1.1% inflation rate below the previous forecast of 1.4%. The BoJ noted that a dovish monetary policy would persist for some time.

And that echoed what U.S. Federal Reserve Chair Janet Yellen said in her Congressional testimony last week, when she admitted the global inflation slowdown could call for an "adjustment" to the Fed's policy.

So right now, considering the 1.9% rally over the last week, it's clear that the recent $1,210 low for gold prices on July 7 have become the metal's bottom. That means gold has nowhere to go from here but up.

I'll tell you exactly how high I see the gold price heading in 2017 in a bit, but first, let's take a closer look at its strength since last Friday...

After settling at $1,228 on Friday, July 14, gold prices opened higher on Monday, July 17, at $1,234. After some choppy trading in a narrow range throughout the day, the metal finally closed at that same opening level for a 0.5% gain over Friday's price.

By late Monday, the DXY traded below 95 for the first time since Sept. 8, 2016, reinforcing its clear downtrend. That was great for the price of gold, which opened higher at $1,238 on Tuesday. It steadied higher throughout the session and closed 0.6% higher at $1,242.

Here's a look at the DXY's action over the last week... 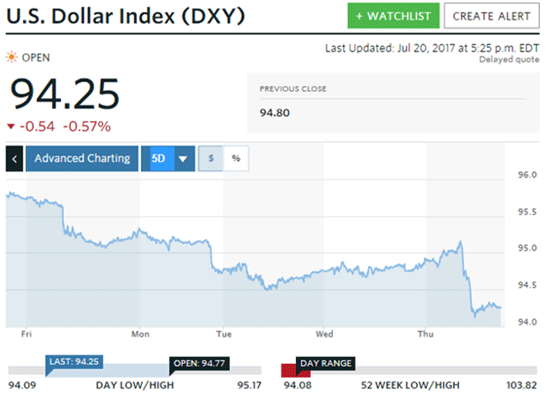 Trending: The 4 Best Silver Investments to Make in 2017

This week's gains mark a change in sentiment for gold. Now that prices are up 3.4% from the July 7 bottom of $1,210, I think that momentum is poised to continue through the second half of 2017.

That's why I see the price of gold reaching these higher targets by the end of the year...

My Bullish Gold Price Prediction for the Rest of 2017

Of course, living in the land of Oztralia at the end of the planet, one could say that its distance does lend perspective.
But, it doesn't explain in any way the increasing insanity in this world of rapidly vanishing occupations, that is moving to a stage that makes the infamous Dutch "Tulip frenzy" infection look tame, almost benign.
The BitCon thing should have imploded by now (after the NetMafia invasion conclusively) demonstrated that it is insane – and even re-reading the info here today, even the USA Budget has more chance of surviving than a "BitCon Xmas".
Or am I alone? Nobody else seems to even notice that the coming EOTWAWKI is also due for Xmas, when the Piper whoever he really is) will want his pay.