The Nasdaq winning streak we broke on Thursday, July 20 – 10 straight "up" days – was the longest streak in more than two years. It was the 20th time the Nasdaq had pulled such a feat since 1980.

What this is, is more potent fuel for the "market that just won't go down" theme.

Lots of forces have come together to provide us with the grinding bull market. And one characteristic of this market has been that pullbacks have been very small.

While there's still a lot of time left in this year, an intra-year drawdown this small is almost unprecedented.

In 1995, as that long-term bull market was hitting its stride, the intra-year drawdown was 2.5%.

And that brings us to another important streak.

This Puts the Rally in Context… and It's Striking

The folks over at Pension Partners put together a chart showing the longest streaks that the S&P 500 has had without having so much as a -5% drawdown.

We're currently at 269 trading days and counting – which means we've gone over a calendar year without a 5% pullback.

That's the longest streak since 1996: 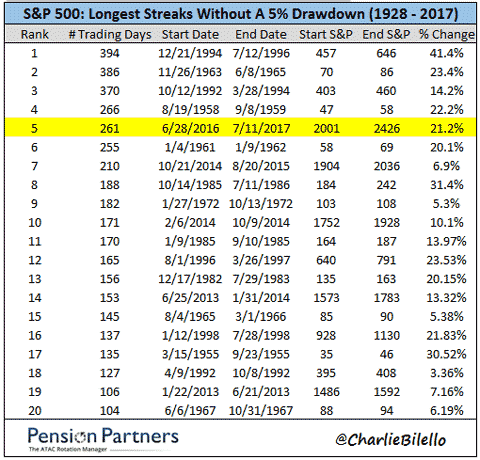 These are all characteristics of what happens when markets are going to grind higher.

I new at this, and I want to make an investment for the future of my family. I don't have a large amount of cash to start. So where should I put what little I have?