During its last Series E funding round in January 2015, SpaceX raised $1 billion from six investors, primarily Alphabet Inc. (Nasdaq: GOOGL) and Fidelity Investments. That round of funding boosted the SpaceX valuation to $12 billion. And today we'll show you how to profit off the hype SpaceX is creating in the IPO market…

Since 2006, the aerospace firm has generated a total of $1.15 billion in funding over seven rounds. According to TechCrunch's research arm CrunchBase, these include five Series A through Series E rounds, as well as a $100,000 initial seed round from CEO Elon Musk and a $15 million round from an undisclosed venture capitalist.
That makes SpaceX the 10th highest-valued private company in the world, according to data compiled by The Wall Street Journal… 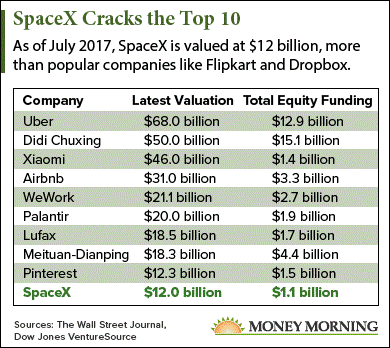 Despite its top 10 valuation and interest from private investors, Musk told a 2015 Tesla Inc. (Nasdaq: TSLA) shareholder meeting that SpaceX will remain private until 2020 at the earliest. But investors can start profiting from IPOs right now, including the SpaceX IPO when it eventually happens.

Before we show you this investment opportunity, here's the biggest reason why SpaceX has accrued $1.15 billion in investment over the last 11 years, raising its valuation to become the 10th biggest in the world…

Why the SpaceX Valuation Has Reached $12 Billion

Although the company has launched other big projects – including its new foray into the broadband satellite market – one of the primary reasons behind SpaceX's 11-year-long rise in funding since 2006 has been the unique ambition of Musk's long-term vision. He wants to eventually colonize Mars and create a multi-planet civilization for humans.

You see, Musk ultimately wants to use SpaceX's Falcon 9 rockets to send people to Mars for a realistically affordable price. The Falcon 9 is the company's signature model, which is currently used to send payloads and supplies to the International Space Station (ISS) orbiting the Earth.

One of Musk's initiatives is to make Mars travel more affordable. At the International Astronautical Congress in September 2016, Musk estimated a single ticket to Mars would cost around $10 billion – as much as purchasing two blocks of property in Midtown Manhattan.

Trending: Here's How Revenue Projections Could Affect the SpaceX Valuation

However, he also said he hopes to lower that ticket price to below $200,000. At the conference last September, he said achieving that lower cost would require "full [rocket] reusability," which is an initiative he's been having more success with this year…

On March 30, SpaceX successfully launched and landed its first reusable Falcon 9 booster – the rocket's primary engine responsible for lifting it into orbit. This made SpaceX the first aerospace company in history to launch and land a reused rocket.

Since then, Musk has been working to consistently recover and refurbish these boosters for cost-saving purposes. The company had two back-to-back launches of reusable boosters on June 23 and June 25. Although SpaceX doesn't publicly disclose the total Falcon 9 production cost, the company has said a Falcon 9 booster alone makes up roughly 70% of the total cost. 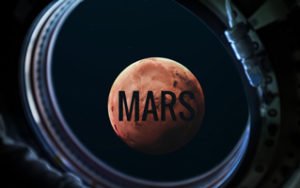 If the company can start reusing boosters after each launch, it would cut the production cost by up to 70%. In turn, that would let Musk charge less for each ticket and get him closer to his goal of making Mars travel cost only $200,000 per person.

Whether or not SpaceX is able to achieve this goal before the IPO, investors are still eager to buy SpaceX stock when it starts trading. After all, investor interest is why the SpaceX valuation is $12 billion and why the firm has seen $1.15 billion in funding so far.

According to Money Morning Director of Technology & Venture Capital Research Michael A. Robinson – a 34-year veteran of Silicon Valley who's worked as a consultant for venture capital firms – there's a great way to profit from the IPO market in 2017.

In fact, this investment has handed investors a 13.1% return so far this year, beating the Dow Jones' 9.5% return. That means you can start profiting from IPOs right now, plus you'll gain exposure to SpaceX when it goes public.

One of the most important reasons we're recommending this investment is because it offers exposure to the IPO market without the risk of buying into an individual IPO. When companies go public, their stocks often experience volatility during their first few months on the market.

Here's how you can make money from newly public companies, including SpaceX's eventual IPO, without the risk of buying in on day one…

The Best Way to Make Money from IPOs in 2017

I love how the article simply lacks the second part.

Also Falcon 9 will never send people to Mars and the booster is not an engine.