Our Executive Editor, William (Bill) Patalon, III, doesn't miss a beat when it comes to the latest developments in the "Asian arms race" - especially when North Korea or the South China Sea are concerned.

Yesterday, when news broke that Chinese military forces were bolstering defenses on the 880-mile border with North Korea, Bill gave his own prescient take on what the Red Dragon was really up to...

Preparing for a South Korean invasion of North Korea.

China Is Readying Itself for a Second Korean War 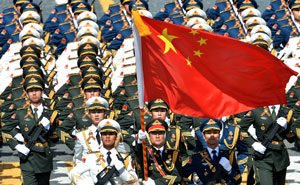 "This isn't farfetched - not at all," Bill said of his theory. "And China's military game plan clearly factors in this option - which would bring American and Chinese military forces face to face on the peninsula for the first time since 1953."

Bill went on to explain that China could be preparing for a reverse replay of how the original Korean War began - on June 25, 1950, when North Korean forces (backed by Moscow and Beijing) invaded South Korea.

That offensive spurred a counter-offensive that saw U.S. and South Korean forces push their way north, all the way to the Chinese border.

And that's how Bill suspects a Korean War 2.0 would start, only in reverse - with Washington and Seoul-backed military forces invading the North.

When this happened in the 1950s, "China stunned the world by sending its own troops into action," Bill explains. "Ultimately, China's combat efforts led to the stalemate that ended with a treaty-less armistice three years after the fighting first started."

And Bill is not alone in his theory...

Defense Expert: A U.S.-China War Will Happen on the Korean Peninsula

Defense policy analyst Mark Cozad, once a senior U.S. defense official for East Asia, told The Wall Street Journal yesterday (July 25), "Once you start talking about [U.S. and South Korean] efforts to stabilize the North, to seize nuclear weapons, [then] you're looking at a much more robust Chinese response. If you're going to make me place bets on where the U.S. and China would first get into a conflict, it's not Taiwan, the South China Sea, or East China Sea: I think it's the Korean Peninsula."

And Washington's "efforts to stabilize the North" are very real indeed.

For example, the U.S. based its powerful Terminal High Altitude Area Defense (THAAD) system in South Korea this past April. This escalated tensions on the peninsula and frightened Chinese military analysts.

"China is paranoid that Washington will use the skirmish on the Korean peninsula to push its agenda in the South China Sea," Bill says, "which is one reason Beijing hates the Pentagon's deployment of the THAAD missile-interceptor system in South Korea so much: Beijing claims the unit's powerful radar will be used to spy on mainland China."

Perhaps China has good reason to be paranoid...

Over the next five years alone, the U.S. military will spend a mammoth $1.743 trillion to defeat China.

And behind the scenes, the Pentagon has been secretly placing big bets on a new generation of defense contractors...