In my update last week, I made the case for why I thought gold prices had bottomed on July 7 at a nearly three-month low of $1,210.

This week’s action seems to be cementing that view, with the gold price on track to post a weekly gain of 0.6%. If that happens, gold will have posted its third weekly gain in a row since the July 7 bottom.

Gold’s been hitting my targets pretty consistently, with the $1,260 target I mentioned last week already surpassed with today’s 0.3% gain to $1,263. The catalysts behind this past week’s lift were the Federal Reserve and the U.S. dollar.

In fact, the price of gold closed at $1,260 – the highest since June 14 – thanks to the Fed’s decision to keep interest rates unchanged after the FOMC meeting this week.

Video
How to Tell If Your Gold Is Real

Investors think interest rates may not be raised again until December at the earliest and that deflation may be making a reappearance globally.

As a result of the Fed’s dovish tone, the U.S. dollar sold off pretty hard. The U.S. Dollar Index (DXY) has fallen 26 basis points from 93.86 a week ago to a 15-month low of 93.60 today. Since a cheaper dollar makes gold more attractive to users of other currencies, the DXY sell-off has pushed gold prices higher over the same period.

At this juncture, we could be in for a small consolidation, but then I think the metal’s bias will be higher as bullish momentum, sentiment, and seasonality lift it higher.

Before I show you how much higher I see the gold price heading this year, let’s look at its strong performance this past week… 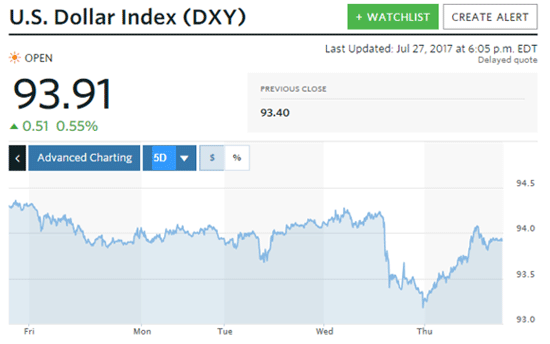 The gold price weakness followed through into Wednesday morning as traders sold further before the Fed’s 2 p.m. statement that it would keep interest rates steady. But by 4 p.m., gold prices had surged higher to $1,261 on the back of the dollar’s sell-off, which took the DXY from 94.20 to 93.40 in just over two hours. The metal eventually closed 0.8% higher at a six-week high of $1,260.

Trending: An incredibly rare gold anomaly is shaping up in the markets as we speak — one that has occurred ONLY twice in the past 20 years. And it’s about to happen again. Details here…

With this being gold’s third consecutive weekly gain, it’s becoming increasingly clear that July 7 was undoubtedly the bottom. And like I said above, I think momentum, seasonality, and sentiment are all on gold’s side right now, which is why I’m bullish on gold prices in the second half of 2017.

This Is My Bullish 2017 Gold Price Prediction