This time, the siblings are prepared to sway GOP leaders' decisions on tax reform. 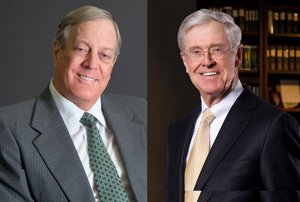 Both Freedom Partners and AFP are Koch-backed organizations.

The event has been billed as an opportunity for "the White House and the Koch network to argue the benefits of a tax code rewrite," reported The Hill this morning.

But "arguing benefits" isn't all the Koch brothers will be doing; they'll actually be shaping the U.S. tax code…

The Koch Brothers' Wish Is the GOP's Command

The Koch brothers say that they didn't like the tax because it would burden taxpayers by increasing consumer prices.

Of course, the Kochs also have major stakes in Canadian tar sands imports. Any import tax on goods – including oil – coming in from Canada would cost them a pretty penny.

AFP's President Phillips didn't hide his excitement after the tax was shut down: "We're greatly encouraged to see leaders put this harmful provision behind them and start to unify around a positive vision for tax reform," he said, according to Roll Call this morning.

Phillips added that the Koch brothers' organization will continue working with lawmakers and the White House to advance its vision for a tax code built on "positive principles."

"Not burdening taxpayers" is just one of those five principles.

As outlined on AFP's website, the organization adheres to the following principles when it comes to crafting ideas for Washington's tax reform:

As part of their effort to affect tax reform changes, AFP and Freedom Partners have run digital ads urging lawmakers to adhere to these principles.

Additionally, the group's volunteers will be making calls this summer to urge lawmakers to back a tax code overhaul.

While the Kochs' principles sound solely beneficial to average Americans, they aren't always so ideal once they're applied to a bill.

This "push" fell in line with their fifth principle because Medicaid recipients who are able to work – but don't – place undue burden on the taxpayers who do.

"By taking measures to ensure that temporary cash assistance remains temporary, research shows that more Floridians would enjoy the dignity and extra income that comes with work," AFP wrote on its website this week.

This arguably Orwellian justification shows that both the government and the Kochs can justify any piece of legislature they come up with using their five principles.

Yet no matter how unpredictable and shady these tactics prove to be, there are six Unstoppable Trend tactics that our Chief Investment Strategist Keith Fitz-Gerald employs to cut through Uncle Sam's detritus.

10 Triple-Digit Winners This Year… and Counting

Keith's Money Map Report subscribers who have followed along with his recommendations are now sitting on 10 triple-digit winners this year – including a 201.68% return and 132.35% gain that closed out in the same week.