Editor's Note, Dec. 5, 2017: Since we first published this story in July, the 12 cryptocurrencies listed below have enjoyed an average gain of 145%. Readers who acted on these recommendations when we first released them have doubled their money or better. It’s not too late to profit from the cryptocurrency boom. You just need to know how to find the fastest cryptocurrency profits. Stay ahead of the money - and make more - with our free, real-time Cryptocurrency Profit Alerts sent to your inbox. Sign up now here.

Bitcoin, with its first-mover advantage and robust security, is the best cryptocurrency to invest in today. 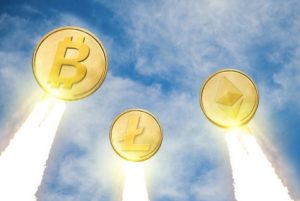 There are other cryptocurrencies worth putting some money into - and we'll look at some of those in a moment.

But Bitcoin (BTC) has emerged as the blue chip of the bunch.

In a nutshell, here's why Bitcoin remains the best cryptocurrency to invest in despite all the competition:

And despite the big gains Bitcoin has enjoyed - more than 180% just in 2017 - it's not too late to invest. The price of Bitcoin is likely to double by the end of the year. And over the next decade or so, the Bitcoin price could reach $100,000 or even $1 million.

But what about Ethereum? The No. 2 cryptocurrency is also a very good bet...

Why Ethereum Is a Good Cryptocurrency to Invest in

Having launched in 2015, Ethereum (ETH) is not only younger than Bitcoin, it's younger than hundreds of other cryptocurrencies.

And yet it quickly surged to the No. 2 spot, giving you some idea of how much potential Ethereum has.

That potential is reflected in the huge gains in the Ethereum price. Even with its recent pullback to just under $200, the price of Ethereum is up 2,300% this year alone.

Some mistakenly believe Ethereum is in a rivalry with Bitcoin, but their differences make them complimentary.

These are also the traits that make Ethereum the next-best cryptocurrency to invest in:

These are the primary reasons why Ethereum price predictions for the end of 2017 go as high as $500.

Still, some investors want to venture beyond Bitcoin and Ethereum into the wider world of cryptocurrencies...

Investing in Cryptocurrencies: Fantasy vs. Reality

Of the more than 1,000 cryptocurrencies that have been launched, all but 26 trade for under $5. 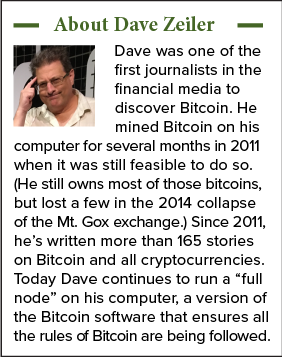 It's easy for investors to believe a cryptocurrency they pick up for $0.50 each will go to $100 or $1,000 and make them rich, even starting with modest sums of a few hundred dollars.

While not impossible, such an outcome is not likely. Apart from Bitcoin and Ethereum, only a handful of the hundreds of cryptocurrencies out there will enjoy substantial gains.

Think of cryptocurrencies today in terms of the dot-com boom of the late 1990s. Many of the overhyped Internet-based companies of the day went belly up in the dot-com bust of 2000-2001, taking billions of investor dollars with them.

But those with sound business concepts - Amazon.com Inc. (Nasdaq: AMZN), eBay Inc. (Nasdaq: EBAY), and Priceline Group Inc. (Nasdaq: PCLN) - went on to realize the promise of the dot-com hype.

The challenge is to figure out their latter-day equivalents among the cryptocurrencies.

For those willing and able to bear the risk, we've put together this list of the 10 best cryptocurrencies to invest in outside of Bitcoin and Ethereum...

The 10 Best Cryptocurrencies Not Named Bitcoin or Ethereum

Awesome report – exactly what people want to know right now – As always David, you've hit the nail on the head with this report – Great job!

Please could you give me information on how to purchase Crypto currencies? Can this only be done through a Broker account? Or can they be purchased directly with a credit card?

Cannot be bought through any brokerage account-yet. You must buy bitcoin first then buy other currencies with bitcoin. Buy bitcoin through private person or an exchange like Coinbase allows you to deposit fiat USD to buy bitcoin via CCard or bank account

I have used Coinbase.com for 6 months on someone's suggestion. It has worked for me and they don't charge huge service prices. They will be accepting bitcoin cash in January. they have the customer security in mine.
I would suggest to have a private wallet like Blockchain Wallet to keep things safe.

Can you tell me more about ONECOIN

Onecoin was a scam. Which is why investors need to be cautious about which cryptocurrencies they buy.

Hi Dave,
Any word on Plexcoin?? Worth it or another Scam?

hi, what are the 10 Best Cryptocurrencies Not Named Bitcoin or Ethereum? i don't find them on the page

how long should you hold on to these coins

As long as you can.. Treat it as a long term investment. It will go up and down and the long term is up.

I would say two to three years at minimum. Cryptocurrency is at a very early stage. IT may take longer, say five to seven years, for many of these cryptocurrencies to realize their potential.

I'm interested in buying or investing in cryptocurrency. Need info and guidance to proceed.

How do I buy crypto currecies when in Africa,Uganda to be specific. I don't want to be left behind when the 10 year prediction comes to pass! Please advice.

Buying Bitcoin and other cryptocurrencies in many developing countries can be difficult because of the scarcity of places where local currency can be exchanged for cryptos. Apparently Paxful is one place to obtain Bitcoins in Uganda. Or if you have BitPesa, you can use that. Or you can use localBitcoins, but that means you'll have to meet up with another Bitcoin user in person and buy from them. However, once you have obtained Bitcoin you should be able to transfer that to a cryptocurrency exchange like Poloniex or Bittrex. There you'll have access to many cryptos.

Great article Dave, well organized! I wonder what do you think about Publica.io – they are building a platform that aims to bring the publishing economy into the blockchain revolution.

I've always thought that publishing is a great use case for blockchain technology. Time will tell if Publica has the answer. I'm also following the Brave browser project, which incorporates the Basic Attention Token (BAT) in a similar way.

I put $9,000 into USIUSA-Int, they've seemed to have stopped giving those of us who invested in them their money back, after running in to problems, supposedly because those of us in Europe and the USA were overselling the product. Can you give me any insight into this company, as they say they are going to honor their promises because they don't want anyone to be hurt by the problem they said they had, (and maybe their on the up and up), and I don't know if I should buy other bitcoin to make certain I don't loose out completely, or trust them.

Thanks for reading Money Morning. I had not heard of USI USA before, but it appears to be a Ponzi scheme. See this article. I'm afraid your money may have been stolen. Sorry I can't provide better news.

What’s the best crypto to buy right now apart from BTC and ETH ?