So far, the gains have been small but steady, with the average daily price gain since July 7 being 0.5%. Because of silver's "quiet rally" and ongoing mispricing relative to gold, I think silver prices in 2017 can continue to climb much higher. The gold/silver ratio has been above the 75.50 level all month for the first time since May 2016, indicating a mispricing with gold.

Additionally, I think the falling U.S. Dollar Index (DXY) - down 52 basis points last week to its lowest level since April 2016 - and a dovish U.S. Federal Reserve will help lift the silver price higher. Those factors combined with improving momentum and sentiment all add up to a big bull run for the metal this year.

Before I get into my specific 2017 silver price prediction, let's take a closer look at the metal's third straight weekly gain last week...

After settling at $16.50 on Friday, July 21, silver prices opened Monday, July 24, at the same level. Unfortunately, that open marked the highest level of the session, as the metal tumbled 0.2% lower to close the day at $16.46.

Tuesday saw a small rebound despite the silver price nearly perfectly mirroring the DXY's bearish performance. As the DXY fell from 94 to 93.70 in the morning, silver opened lower at $16.28. However, both gradually climbed higher, with the DXY closing back above 94 and silver prices closing at $16.48 for a 0.1% gain on the day.

Here's a look at the DXY last week... 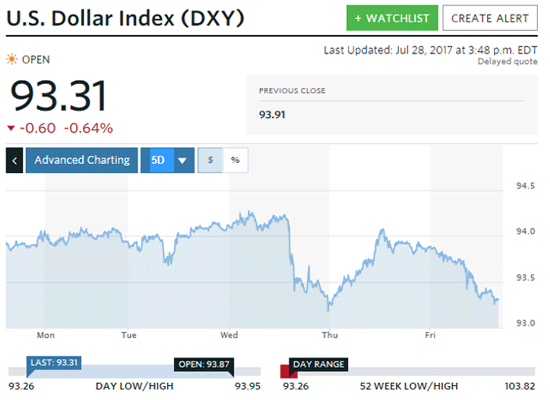 The rally really kicked in on Wednesday as silver prices recuperated dramatically. Despite opening lower at $16.41, they rocketed higher midday as the Fed kept interest rates unchanged and the FOMC statement rang dovish. As the Fed's announcement dragged the DXY lower from 94.23 to 93.40, silver surged to $16.64 by close. That marked a 1% rise on the day.

With last week's rise, silver has posted three consecutive weeks of gains. The metal's winning streak is a strong indication that sentiment is turning bullish, which is why I think silver prices could head much higher through the second half of the year.

Here are my bold silver price targets for the rest of 2017...

My Silver Price Forecast and Price Targets for 2017