The new coin jumped as high as $422 in early trading before retreating to $255. That said, the Bitcoin split is far from complete. 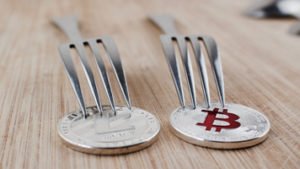 The total cryptocurrency market capitalization nearly hit $96 billion in morning trading before it ticked down to $92 billion in the afternoon. This figure, however, does not account for Bitcoin Cash (BCC).

Bitcoin prices fell to $2,718 after the "hard fork" took place and fueled a bout of volatility. The split brought about the trading of Bitcoin Cash, a newly created digital currency made by developers who wanted to increase the size of each block in the blockchain.

This process has been very technical and complex, which is why Money Morning Cryptocurrency Expert Dave Zeiler created a detailed report on the "hard fork" and Bitcoin Cash. Dave mined his first Bitcoin back in 2011, and he's written more than 165 stories on Bitcoin and cryptocurrencies since then.

Ethereum prices jumped more than 10% after Bitcoin's hard fork. The chief rival to Bitcoin benefited from the ongoing uncertainty surrounding the hard fork. Traders were also speculating on a bullish report from Wall Street analyst Ronnie Moas, who predicted over the weekend that Ethereum prices would hit $400 in 2018.

Ripple prices ticked higher at the expense of falling Bitcoin prices. The markets were also weighing positive comments from Stefan Thomas, CTO of Ripple. In an interview with Fortune on Monday, Thomas argued that Ripple is less susceptible to any future fork between its developers. Thomas said that XRP relies more on voting rules that favor users over miners of the currency.

Litecoin prices dipped 1.18% during the trading session, but prices continue to remain strong in 2017. Wall Street analyst Ronnie Moas said over the weekend that he was buying more cryptocurrencies and projected that Litecoin would double in price by next year.

Dash prices added more than 3.5%, but its market capitalization failed to climb back into the top five cryptocurrencies on the market. Dash trails NEM for fifth place.

The uptick comes after Dash experienced about a 16% decline over seven days of trading. The cryptocurrency continues to experience volatility as it attempts to join the elite pool of rivals in the space.