Gold prices are moderately lower in pre-U.S.-session trading today. The market is seeing some profit taking from recent gains and is pressured a bit as the U.S. dollar has stabilized at mid-week, after its recent selloff. 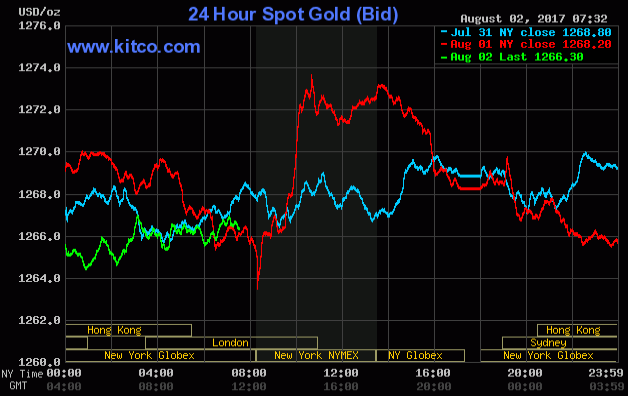 In overnight news, India's central bank lowered its key interest rate by 0.25%, to 6.0%. The move was not unexpected.

The Eurozone producer price index was reported down 0.1% in June from May, and was up 2.5%, year-on-year. Those numbers were in line with market expectations.

The important "outside markets" early Wednesday find the U.S. dollar index slightly lower. The index is trying to stabilize at mid-week after hitting a 13-month low Monday. Meantime, Nymex crude oil futures are near steady and trading just above $49.00 a barrel. Oil prices hit a two-month high Tuesday and remain in an uptrend on the daily chart.

The big U.S. data point of the week is the monthly employment situation report released by the Labor Department on Friday morning. The key non-farm payrolls component of that report is forecast to show a rise of 180,000 workers.