Contrary to the dire predictions of its critics, the Bitcoin Cash price has not tumbled to zero in the wake of this week's controversial Bitcoin hard fork.

It's true that the price of Bitcoin Cash (ticker symbol: BCH) has dropped from short-lived highs of as much as $750 in the day following the Aug. 1 fork. But the BCH price has held up remarkably well considering the amount of Bitcoin Cash getting dumped into the market.

As of midday today (Friday), the Bitcoin Cash price on Bittrex, one of the first major Bitcoin exchanges to allow deposits of BCH, was about $285. That represented a drop of nearly 40% from the Bittrex BCH price of about $450 just one day earlier.

Meanwhile, the Bitcoin price (ticker symbol: BTC) of the original version of the digital currency shrugged off the hard fork. The BTC price rose as high as $2,925 just ahead of the hard fork.

The price of Bitcoin dropped 8.3% after the fork but soon recovered. By Friday, the BTC price was back up to $2,875.

The main reason the Bitcoin Cash price rose so steeply after the hard fork - futures markets prior to the hard fork had put the price at about $300 - was a lack of BCH supply.

Some exchanges credited customers with BCH in equal amounts to any legacy Bitcoin already in their account.

People who stored their Bitcoin in their own Bitcoin wallets also got the Bitcoin Cash, but could not move it into any of the exchanges. As a precaution given the uncertainty over the hard fork, the Bitcoin exchanges have waited to allow BCH deposits.

So with Bittrex among the first to open the door to Bitcoin Cash deposits late yesterday, it has become the focus of BCH trading action. Bitcoin Cash trading volume on Bittrex over the past 24 hours is just over $50 million, more than double the volume of any other exchange.

Those who opposed this hard fork consider BCH an illegitimate version of Bitcoin and have vowed to dump it at their first opportunity, which is happening now on Bittrex.

And while the influx of Bitcoin Cash selling has put pressure on the BCH price, it hasn't delivered a knockout blow. And it won't...

Why the BCH Price Keeps Bouncing Back

Keep in mind that the recent Bitcoin hard fork was the result of a civil war over the best way to scale the network to accommodate more transactions. Emotions have run high on both sides. 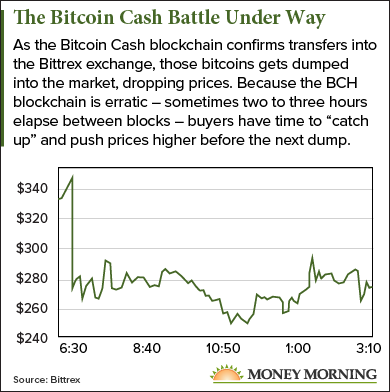 Now each side has the version of Bitcoin it prefers, and both are utterly convinced their version will prevail in the long run as the "real Bitcoin."

While the expectation of Bitcoin Cash haters dumping BCH is valid, it leaves out the other half of the story. Those who support Bitcoin Cash do so with great passion, as evidenced in numerous Reddit threads.

These folks are eager to snap up the Bitcoin Cash the other side is dumping. They're also likely to fund those purchases with the proceeds from the sale of the BTC they own.

Now, the Bitcoin Cash faction is relatively small. How small is hard to say, but it's likely only 10% to 15% of the larger Bitcoin community. But this group has one key advantage - the high BTC price.

Why Bitcoin Cash Has Strength Beyond Its Numbers