In cryptocurrency trading news on Monday, the Bitcoin price hit a new all-time high as investors cheered the planned Segwit2x implementation and ignored any threat from last week's hard fork. 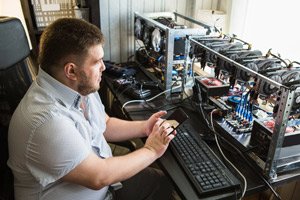 Outside of the top five cryptocurrencies by market capitalization, NEO is generating the most headlines. The cryptocurrency has rebranded from the name "Antshares," a marketing decision that seems to have gained favor with investors.

The price increased more than 27% over the last 24 hours, and some are speculating that it could become the "Ethereum of China." The company will hold a conference call on Aug. 10, in which it will discuss planned software upgrades and other features that could help bolster investor interest.

Below is a recap of cryptocurrency prices at 2 p.m. EDT

Bitcoin surpassed a $55 billion market capitalization Monday in a session of heavy trading volumes. Roughly $1.35 billion in Bitcoin exchanged hands as money continues to pile into the cryptocurrency.

The miner-forced hard fork was unable to make a long-term dent in prices, which have rallied from the mid-$1800s just weeks ago.

Recent swings in price have pushed the Bitcoin 30-day Volatility Index to its highest level since 2015, according to Bloomberg.

The newest cryptocurrency to the Big Five just won't go away. Bitcoin Cash has rebounded from a low of $200 to $265 over the last 24 hours. The coin has received some support after a massive sell-off from last week.

There has been some increased optimism over Bitcoin Cash's future after CoinDesk announced it plans to support it by Jan. 1, 2018.

Ethereum prices rallied over the weekend thanks to a broader market in the cryptocurrency sector. But prices have been slightly flat over the last 24 hours.

Traders remain highly confident over the future of Ethereum thanks to its ability to handle higher levels of transactions at lower transaction costs.

Analysts anticipate that its Raiden Network, used for payments, will also improve privacy and the number of transactions from current levels.

Ripple prices were the worst performer of the big cryptocurrencies on Monday.

Prices fell more than 1.8% on the day, but it's now climbed to the third-largest market capitalization after last week's downturn in Bitcoin Cash prices.

That's still well below the $25 billion in market cap for Ethereum and $55 billion for Bitcoin.

Litecoin prices were flat over the last 24 hours as markets turn their attention to Bitcoin's recent surge.

It's Coinbase, not CoinDesk that announced support for Bitcoin Cash in January.