Although silver prices saw some mild profit taking from investors early last week, the metal took a 2.3% nosedive on Friday, Aug. 4. That loss was responsible for the price of silver's 2.5% weekly decline since Friday, July 28.

Since silver is priced in U.S. dollars, any rise in the dollar's value makes gold more expensive to users of other currencies. That usually reduces demand, which weighs on the silver price and explains Friday's 2.3% decline.

However, all of this just means silver is trading at a great bargain. Silver's losses have pushed the gold/silver ratio back above 77, meaning it trades at a value compared to gold. I think this could cause a wave of buying behavior and send silver prices much higher this year.

Before I get into my bullish silver price prediction for the rest of 2017, let's look at the price's day-to-day movements last week… 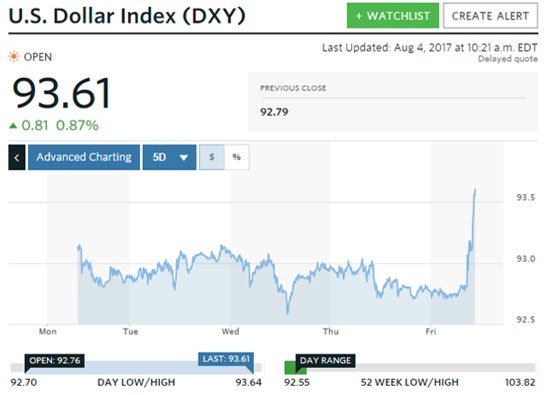 Both silver and the dollar were volatile on Wednesday, with silver starting the day lower at $16.63. A mini "flash crash" dragged it down to $16.50 at 9 a.m. as the DXY was peaking back above 93. But the metal and the dollar reversed course by midday, with the former rising to $16.70 and the latter falling 40 basis points to 92.60. The price of silver eventually ended the session flat at $16.73.

Thursday saw some profit taking from silver investors even as the dollar dropped below the 93 level yet again. Despite opening at $16.53 and climbing from there throughout the day, silver prices settled at $16.63, 0.6% lower from the previous close.

Last week's sharp decline has come as a shock to investors. After all, the price of silver was thought to have bottomed on July 7 at $15.37. Now that the metal is back near three-week lows, investors may be worried the rally since July 7 is coming to an end.

However, I don't think you should worry about this recent volatility. I still believe silver prices are poised to rebound now that they trade at a discount to gold.

This Is Where the Silver Price Is Headed This Year

The Fed(Mrs. Yellen) use every little thing to create favorable messages without telling the truth and nothing else then the truth. That jobs have risen we take that for granted, however, there was no mentioning of seasonable jobs, it´s
vacation time so jobs are temporarily, and in September short time jobs in the
agricultural sector because it´s then harvesting time for certain commodities.
After that period jobs go down. Mrs. Yellen please be a little bit more realistic.!!!

During the first 5 months of this year your forecast for Silver was $22.00 per oz
by the end of 2017. The last couple predictions are significantly lower!
Why?

Stocks go up, silver and gold go down.

Stocks go down, silver and gold for down

the whole thing is rigged around the petrol dollar.