(Kitco News) - World stock markets were mixed to weaker overnight. There was some downbeat economic data coming out of Germany and China Tuesday. China's imports were up 11% in July versus up 17% in June. China's exports were up 7.2% versus up 11.3% in June. Germany's trade surplus grew in June, but its imports and exports declined. U.S. stock indexes are pointed toward slightly lower openings when the New York day session begins.

Gold prices are firmer today, recovering from renewed selling pressure, most of which was profit-taking from the shorter-term futures traders. 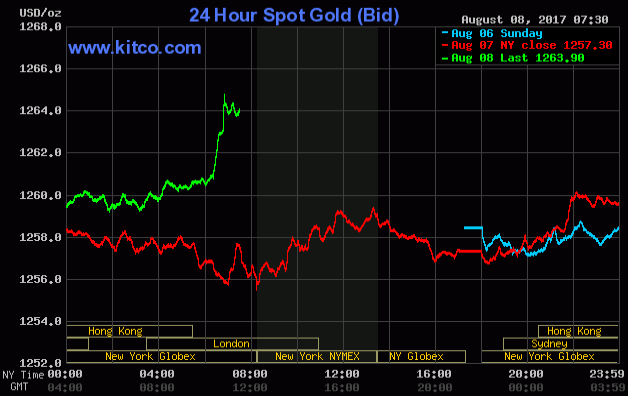 North Korea has threatened to use its nuclear weapons against the U.S. after the United Nations slapped more sanctions on the rogue nation. This news could also be prompting a bit of safe-haven demand for gold. This matter won't just go away and will likely get worse before it gets better.

The U.S. dollar index is weaker in early U.S. trading Tuesday. The index has been trending lower all year long and the bears possess the strong near-term technical advantage.

Meantime, Nymex crude oil futures are slightly up and trading just below
$50.00 a barrel. Reports overnight said OPEC leader Saudi Arabia is planning to reduce its oil exports to Asia. OPEC members are meeting this week in Abu Dhabi.