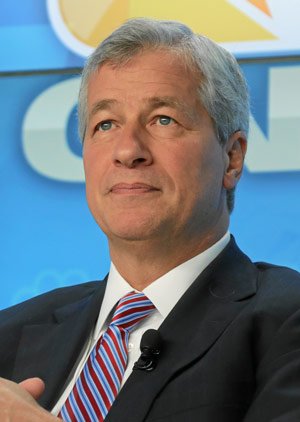 Bankers are making their way to the White House.

According to The Financial Times, JPMorgan Chase & Co. (NYSE: JPM) CEO Jamie Dimon may run for president in 2020.

The investment banker himself has yet to confirm the rumor, but a former senior manager at the firm recently ousted Dimon's possible plan when asked "Will Jamie Dimon run for president?"

"Former colleagues believe he might throw his hat into the ring to become the next leader," reported FT on Aug. 3.

Naturally, citizens - and investors - have a lot of questions about the potential of a big banker leading the White House. Here's what a Dimon presidency could look like...

Earlier this year, Dimon raised eyebrows when he discussed a variety of topics like education and the economy during an interview with Business Insider.

But perhaps the most shocking portion of the interview was when Dimon began to discuss America's crumbling infrastructure.

What Political Party Will Dimon Represent?

According to FT, Dimon is a Democrat.

And so is his potential political ally - Jes Staley.

Jes Staley was once Dimon's heir apparent at JPMorgan Chase and spent over 30 years with the company. But in 2015, he became CEO of Barclays (NYSE: BCS) in Britain.

And if Dimon decides to run for office, Staley could be the perfect overseas partner.

"If Mr. Dimon were to pursue his political dream, he might be tempted to call on Mr. Staley to join forces," reported FT.

However, the duo wouldn't come with a clean slate...

Both Staley and Barclay's are caught up in an investigation by the UK's Financial Conduct Authority, the Bank of England's Prudential Regulation Authority (PRA), and New York's Department of Financial Services over a whistleblowing scandal that took place in June.

According to a report by The Guardian, Staley made an attempt to unearth the identity of a whistleblower at the firm - a major "no-no" in the eyes of the FCA.

And he's not the only one in hot water with authorities...

In March, Bruno Iksil - the long-disgraced "London Whale" trader - threw Dimon under the bus and revealed his true role in 2012's trading disaster.

The disaster cost millions of investors serious money from the fallout of JPM stock in 2013. Yet Dimon walked away scot-free.

That's because, according to Iksil, then CEO-hopeful Dimon and JPMorgan used Iksil as a scapegoat to cover up their own actions.

Even worse, according to Iksil's account, JPMorgan actually profited from the fiasco, while Iksil lost his job, reputation, and most of his multimillion-dollar compensation.

All the while, Dimon was raking in millions of dollars from his cushy salary.

And Dimon could very well use those millions to beat a path from Wall Street to the White House - following in the footsteps of President Donald Trump. Make no mistake: Nobody can win an election without the massive wealth necessary to finance a campaign.

Even if you don't want to run for office, the way to these kinds of riches is no secret - if you know where to look.

In fact, there's a little-known class of investments that billionaire investors and presidents alike have used to amass their incredible wealth - Donald Trump included. Take a look...

Jamie Dimon for President?
He is a thief.He caused not only the loss of life savings for many people but also cost lives.
Shakespeare was wrong. Forget the lawyers; kill the investment bankers first.
How did these guys get bailed out? How many of us would get bailed out 100% if we ran our businesses into bankruptcy?

Jamie Dimon for prison not for president.