Friday was another down day in a relatively volatile week where not every dip was what it seemed.

But for us, that number isn't much of a surprise.

You already know that we've been in a grinding bull market since that early 2016 double bottom, excluding the minor pullbacks following the June 2016 Brexit vote and the October 2016 pre-election jitters.

The chart picture is striking, and I'm going to show it to you along with a chart that shows when we might have to start moving to a defensive posture. 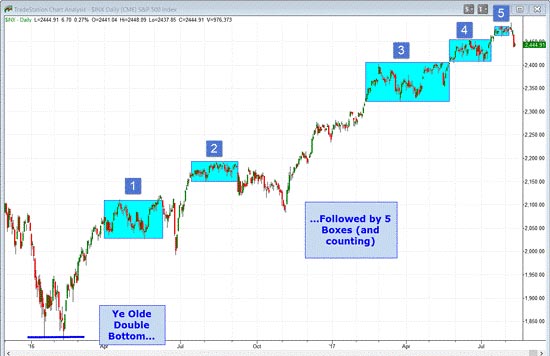 We already know that the boxes containing sideways – or "directionless" – price movements can be a challenging time for traders looking to catch a directional trade rather than playing the handful of stocks showing "extreme" behavior at an otherwise quiet time.

Quiet is relative, though. Thanks to our Hooke Pattern system, my Stealth Profits Trader readers have pulled in 53 triple-digit winners in this timeframe, and if you're playing the extremes, you've probably done well, too.

That's why I mentioned the stinkin' boxes in the first place.

Today, we'll use the boxes for something other than to shout about a "Do Nothing Market" with colorful language attached.

Because the big question is this: Does this renewed volatility, and all the geopolitical worry surrounding the bombastic leader of North Korea, mean we should do anything different with our portfolio or trading?

Strangely (and wonderfully), the answers lie within those infamous boxes.

Here's How We Find Market Support and Resistance