Like many cryptocurrency prices this year, the Neo price has enjoyed monster gains peaking at 37,500% on Aug. 13, when Neo tokens hit an all-time high of $52.63. 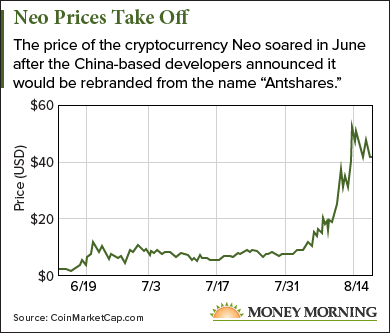 The price of Neo was just $0.14 on Jan. 1. With the current Neo price at about $40, the year-to-date gains still stand at more than 28,000%. And much bigger gains likely lie ahead for this China-based project, as I’ll explain shortly.

The primary cause of the Neo price’s explosive run was a rebranding announcement that took place on June 22 at Microsoft Corp.’s (Nasdaq: MSFT) Beijing headquarters.

The cryptocurrency’s name was to change to Neo from “Antshares,” the name it had from its creation in 2014. The development team said it chose “Neo” partly because it means “new” in Greek, and partly as a tribute to the Keanu Reeves character in “The Matrix” film series.

That announcement, along with the revelation of several upgrades to the Neo blockchain, made it a cryptocurrency darling.

But the spike in the price of Neo is not a fluke, and it would be a mistake to dismiss it as just another overheated cryptocurrency.

Neo is much more than that...

And just as importantly, several of the developers behind Neo also work for a company called Onchain, one of China’s top “fintech” (financial technology) companies.

The project’s high public profile means it has the tacit endorsement of the Chinese government, which has restricted the use of other cryptocurrencies such as Bitcoin.

We’ve seen this play out in other areas of tech. In China, home-grown tech alternatives almost always dominate foreign ones. For instance, Baidu, the Chinese search engine, has a 77.1% market share in China, while Google has a mere 1.7%. 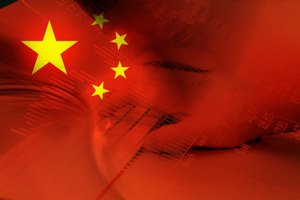 But Neo’s appeal to the Chinese government extends beyond the fact that it’s native born. The developers also tweaked the code to make it authoritarian-regime friendly.

One of the main objections China has to digital currencies like Bitcoin is that the transactions are anonymous unless you can link a Bitcoin address to an individual.

The Neo white paper says the cryptocurrency uses a “mature digital identity system” based on the combination of several technologies.

In a recent “Ask Me Anything” session on Reddit, Neo founder and CEO Da Hongfei pointed out that while the project has “no formal cooperation with” the Chinese government, it has a “good relationship with local governments and various governing bodies.”

It’s not surprising the Chinese government would encourage the Neo project. It recognizes the vast economic potential of cryptocurrencies. But it also wants a degree of control over how that potential is realized.

Remember, this is a country that maps out five-year plans for its economic development. And it’s no coincidence the policies of the current five-year plan (for 2016-2020) emphasize the need for “innovation-driven development.” A government-friendly cryptocurrency platform fits that bill nicely.

And the Neo developers made sure their platform would have economic appeal...

Why Neo Is the “Ethereum of China”

The Neo developers carefully chose which cryptocurrency they wanted most to emulate, ultimately settling on Ethereum. Neo has so much in common with that project that it’s come to be known as the “Ethereum of China.”

One similarity is that Neo can run “smart contracts.” These are digital contracts run on the blockchain that execute automatically when their conditions are met. The “NeoContracts” even do Ethereum one better – the network can translate a NeoContract from multiple programming languages (Ethereum requires developers to use a single, designated language).

The other key technology Neo shares with Ethereum is that it’s “Turing complete.” That means its network can run programs much like a PC does – but on a global scale.

On Wednesday, the Bulgarian-based AdEx Network announced it plans to become the first company to release a Neo-based “Dapp” (distributed application). Ethereum has a growing stable of more than 600 Dapps.

With Neo, China can harness all the disruptive power of Bitcoin and Ethereum without the aspects of those cryptocurrencies it finds troublesome.

Which brings us back to the Neo price.

With Neo set to be China’s platform of choice for blockchain innovation, it has the potential for extraordinary gains in the months ahead – as much as 12 times the current price.

Want to know about Neo