But today's top performer in the largest 50 cryptocurrencies by market capitalization was Monero, which gained more than 45% on the day. 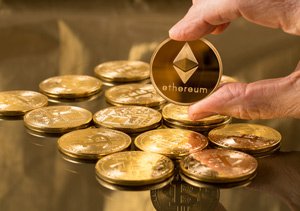 While it is typically hard to choose one story driving the underlying increase in a cryptocurrency's price, South Korea's Bithumb exchange has announced plans to support trading of the coin on Aug. 27.

The total market capitalization of the global cryptocurrency market hit $144.3 billion on the day. Below is a recap of the top cryptocurrency prices at 3:00 p.m. EDT...

Bitcoin Slightly Slumps on the Day

The price of Bitcoin dipped below $4,000 temporarily as traders raise concerns about a potential second split in the cryptocurrency later this fall.

The news comes after Bitcoin Cash became more profitable to mine than its rival in an event being called "the Flippening."

As a result, Bitcoin Cash has pulled about 30% of the mining power from Bitcoin's blockchain. That figure is up significantly from the 5% reported last week, according to CoinDesk.

Over the weekend, the price of BCH pushed to $1,000 per coin thanks to a massive surge in trading volumes in South Korea.

The Ethereum price increased over the weekend on news that the first Swiss bank to offer Bitcoin asset management services will add three additional cryptocurrencies to its platform. Starting on Aug. 22, Falcon Private Bank will support the trading of Ethereum, Litecoin, and Bitcoin Cash.

The bank's global head of products and services said that its decision to add ETH, BCH, and LTC was based on the huge demand it saw after adding Bitcoin in July 2017.

An 8.3% jump in the price of Ripple pushed the cryptocurrency to the fourth-largest market capitalization in the market.

The Ripple rally complemented sharp downturns in IOTA, NEM, Dash, and NEO. News on the Ripple front has largely centered on speculation surrounding the cryptocurrency's desire to enter the Chinese market.

The cryptocurrency received a bullish note from investor and analyst Tuur Demeester, who predicted an uptick in Litecoin as a hedge to Bitcoin.

"If BCH pump fails, money could roll into LTC, it being a real Bitcoin (BTC) hedge. I just invested some BCH profits into LTC."