(Kitco News) – World stock markets were mostly up in quieter trading Tuesday, on corrective bounces from recent selling pressure. U.S. stock indexes are pointed toward firmer openings when the New York day session begins. Many of the world stock indexes, including those from the U.S., are down overall for the month of August.

Gold prices are weaker in pre-U.S.-day-session trading, on some profit taking from recent gains.

The highlight of the trading week is the annual central bankers meeting held in Jackson Hole, Wyoming, Thursday through Saturday. Highlights of central bank speakers from around the world include Federal Reserve Chair Janet Yellen and European Central Bank President Mario Draghi. The marketplace will closely examine the Jackson Hole speeches for clues on future monetary policy moves by the world's major central banks. In recent years the Jackson Hole central bankers confab has significantly moved the markets. 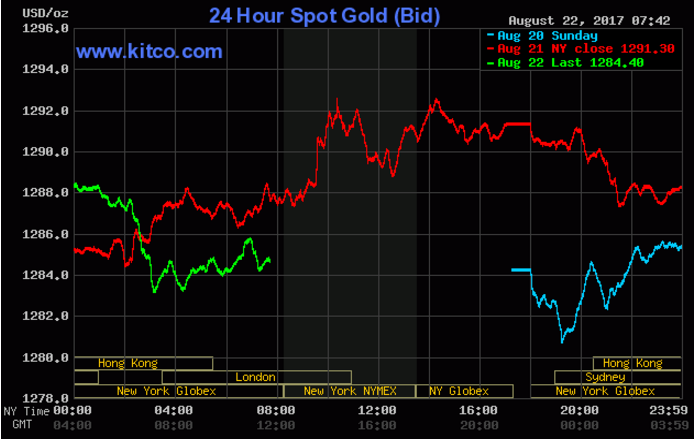 In overnight news, the closely watched German ZEW economic expectations index for August came in at 10.0 versus 17.5 in July. The August reading was well below market expectations.

The key "outside markets" early Tuesday see the U.S. dollar index higher. The greenback has been trending higher during the month of August, but in a choppy fashion. Meantime, Nymex crude oil futures are weaker. Trading in oil has also been choppy recently.