Sessions will have a hard time derailing an industry with $6.7 billion in legal North American sales in 2016 alone. Those sales are projected to climb to $20 billion by 2020. 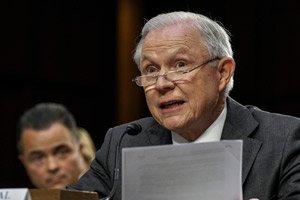 And this 198% increase in sales will reward long-term marijuana stock investors, which we'll have more on in just a bit.

You see, it's only a matter of "when," not "if," every U.S. state legalizes medical marijuana.

A 2016 Gallup poll showed 60% of Americans favor legalizing marijuana, and a 2017 poll showed 45% had at least tried cannabis.

Jeff Sessions' opposition to legal weed is doomed to fail, but it's not too late for investors to profit from marijuana legalization…

On July 24, Sessions told Alaskan officials that the "2015 Annual Drug Report" released by Alaska State Troopers "raises serious questions about whether marijuana 'regulatory structures' will be effective in your state," according to the letter obtained by Huffington Post.

However, on Aug. 14, 2017, U.S. Gov. Bill Walker (I-AK) and Alaska Attorney General Jahna Lindemuth said the 2015 report was not relevant to the regulations on the legal cannabis industry.

Sales from licensed marijuana businesses did not begin until 2016, and Walker and Lindemuth argued Sessions' critiques didn't speak to "the success or failure of the new regulatory framework."

In an Aug. 1 letter, Lindemuth also said state governments should handle issues of legalization. She said Alaska has strict controls that neutralize the involvement of criminal growers, keep marijuana away from children, and ensure Alaskan citizens are fully informed about the risks of cannabis.

Jeff Sessions can keep sending all the letters he wants, but there's no sign his efforts are going to slow down marijuana legalization. Sessions' opposition to legal marijuana might even make him an outsider in the Trump administration.

U.S. President Donald Trump signed a bill in May that will prevent the Department of Justice (DoJ) and the Drug Enforcement Agency (DEA) from using federal funds to prosecute medical marijuana businesses operating in states where medical marijuana is legal.

That means Jeff Sessions doesn't have any choice but to leave medical marijuana businesses alone.

That's not only good news for the marijuana companies, but also for those who invest in them.

Here's how you can get in on the action and potentially turn a small stake into $100,000…

Jeff Sessions may be a good person, but he is far from being a great Attorney General of the United States. Wasting time going against Cannabis legalization is just one example, why is he not going after the traitors in government and helping to drain the swamp??

You are right Jerry. He's a die-hard for sure and refuses to look at the science. An old horse trained with blinders likes those blinders to remain. It's a comfort to them not to see what the blinders block out.

These Sessions letters aren't a threat to anything or anyone. They are "news" only because selectively reporting them (with overstated headlines) gets eyeballs in front of ads. Has anyone reported what fraction of the department's efforts are engaged on this subject? Sub-microscopic I'm sure.