Ripple prices today popped nearly 30% over the last 24 hours thanks to another surge of buying on exchanges supporting transactions in the Korean won. 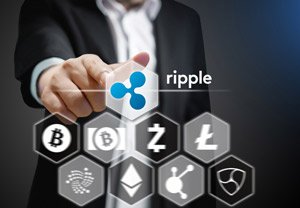 The cryptocurrency moved to third in total market capitalization, surpassing Bitcoin Cash by $15 million in value at 1:30 p.m. EDT.

The price of Bitcoin pushed higher after dipping below the $4,000 range on several occasions since last week.

Investors who piled into Bitcoin in 2015 have made an incredible profit. But it was also revealed in a new report that those investors have been under increased scrutiny from the Internal Revenue Service.

The U.S. tax agency started using a Bitcoin transaction tracing tool from a company called Chainalysis to "trace the movement of money through the Bitcoin economy," according to a new government report.

The IRS says that it is aiming to gather and identify evidence on individuals who have used Bitcoin to launder money or conceal their income.

Today's big news for BCH was that Bitcoin's largest wallet platform, Blockchain.info, will add the coin to its platform within eight weeks.

In a company post yesterday, Blockchain said that it planned to provide "limited support" and that it's been closely watching the cryptocurrency since its hard fork on Aug. 1.

The Ethereum price ticked higher thanks to the broader influx of capital into the market. Investors are optimistic that the cryptocurrency can reach the $1,000 target outlined by Aragon co-founder Louis Cuende in the years ahead.

While Ethereum was inching higher, its offshoot Ethereum Classic climbed more than 25% on news that it could soon see trading interest in South Korea.

The price climbed from roughly $14 per token to roughly $18 in less than an hour after rumors had emerged stating that ETC could follow Monero as the next big thing in cryptocurrency.

Ripple popped by another 28% and is closing in on its all-time high of $0.33, which it hit earlier this year.

Heavy buying and interest in South Korea mixed with rumors that the cryptocurrency is on the verge of finding a way into the Chinese markets are helping traders make big gains.

Litecoin prices pushed back above $47.00 as traders continue to eye that critical resistance level of $50.00 per token. The currency has been locked in a range in recent weeks as other cryptocurrencies grab the headlines.

But there has been an uptick in interest and optimism that Litecoin stands to gain the most from any troubles from the Bitcoin community.