Most Bitcoin charts tell you where the price of the cryptocurrency has been, but this Bitcoin price chart tells you where it's going.
And it's going higher - exponentially higher.

The chart plots the Bitcoin price from 2011 to the present using a logarithmic scale. Although it deviates from the mean often (and sometimes dramatically), the price of Bitcoin shows a pattern that will take it to $100,000 in just over four years. 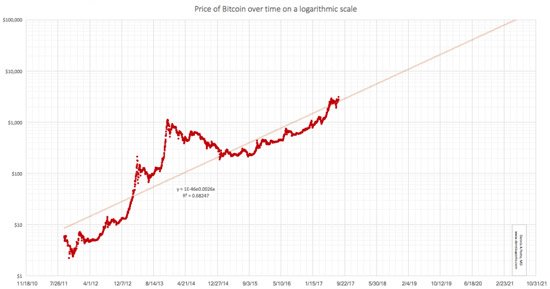 This Bitcoin price chart is the brainchild of Dennis Porto, a dermatologist and a student of Management and Health Policy at Harvard University. Porto is a Bitcoin enthusiast who was just trying to make sense of the cryptocurrency's stunning growth when he realized it mirrored a pattern he'd seen before...

A Bitcoin Price Chart Based on Moore's Law

"I made the observation based on trying to imagine a world where Bitcoin is widespread," Porto told Money Morning. "Then, I imagined the path it would take from today to this time when it is widespread."

The chart shows that the Bitcoin price has doubled roughly every eight months. Right now, the price of Bitcoin is a bit ahead of schedule, with the chart suggesting it wouldn't reach $4,000 until January 2018.

The concept of something doubling at a regular interval rang a bell with Porto, and it should also be familiar to longtime followers of the tech sector. It's the essence of "Moore's Law," an observation made by Intel Corp. (Nasdaq: INTC) founder and CEO Gordon Moore in 1965.

Applying the concept to the price of Bitcoin was something of a leap, but the chart suggests Porto's point has merit. So far, the Bitcoin price has followed the pattern.

"Whenever a technology becomes digital, it sheds the physical limitations that hinder exponential growth and improvement," Porto said. "I can't think of any reason why [Moore's Law] should be applied to computation power only and not other digital applications like digital currency."

He believes that such exponential growth is the only way Bitcoin can achieve the mass adoption it needs to succeed.

"There isn't a way that Bitcoin could 'linearly' grow to a point where it would be used widespread as a source of value or method of transaction. The only path is via exponential growth," Porto said.

Because Bitcoin has a fixed supply - only 21 million will ever be mined - the only way it can realize its potential on a global scale is for the price to go much, much higher. For instance, if Bitcoin were to become the primary means of settlement in global trade, it would need to be worth $1 million.

If the price of Bitcoin continues to follow Moore's Law, it will hit the $1 million mark at some point in 2024 - just seven years away.

The Best Pot Stocks: After nine months of exhaustive research, we've found the best, most lucrative, and fastest-growing legal pot stocks in America. They're all in our 89-page "bible of weed investing," The Roadmap to Marijuana Millions. And for a limited time, you can get all the details for free. Go here to find out how to reserve your copy today...

Bitcoin will see a dramatic surge at the 10k threshold. Institutional investors are jumping in. Overstock is accepting and holding. If you don't get in now. You will be very sorry. It can not be stopped!

I have money I want to invest in the Marauahna!I like to be part of this booming blasting income! Please send me the article or what have to learn more invest into the Marauhna to be business"

How much a share is Bitcoin going for and what's the minimum that can be bought?

Well, it isn't actually a "share" of anything. It's the actual bitcoin. You may, if you like, take actual possession of it by having your own wallet. Or you may place or leave it on an "exchange", where bitcoin and sometimes other crypto currencies, dollars and sometimes other national currencies are traded. The particular exchange or person you choose trade dollars for bitcoin will probably say something like "don't bother me for less than $20" or some such very low minimum, if they have a minimum at all. As far as technically, each of the 21 million bitcoin that will ever be can be divided into amounts called a "satoshi" in honor of the bitcoin creator of legend. One satoshi is one millionth of a bitcoin. Just like you can't actually make change from one currency to US dollars any smaller than "to the penny", one 1/100th of a dollar, you can't get smaller division that one millionth of one bitcoin, a satoshi. Whether a certain number of satoshis is worth picking up off the sidewalk is, of course, in the eye of the beholder. Hope this helps a little.

what is the min amount to buy a piece of bitcoin

You can purchase any amount at coinbase.com

There is no minimum amount per se. Bitcoin is divisible to eight decimal places (the smallest unit being 1 satoshi, or .00000001 of a bitcoin). But since that is less than a U.S. penny, and transaction fees are several dollars, in practice it doesn't make sense to buy in very small amounts (a few dollars' worth). You'd probably want to buy at least $25 worth at a time.