Gold prices have been in a narrow trading range over the last week, hanging mostly between $1,291 and $1,297 since Friday, Aug. 18. But the looming debt ceiling deadline could be bullish for gold...

The biggest gold news this past week was Treasury Secretary Steven Mnuchin's visit to the gold deposit at Fort Knox. This, of course, is the Kentucky army post that serves as the U.S. Bullion Depository and home of most of the country's gold reserves.

Treasury Secretary Mnuchin and Senate Majority Leader Mitch McConnell visited Fort Knox on Monday. We don't know how much gold they actually saw, but Mnuchin stated it was the first time the vault had opened up to outsiders since a congressional delegation and journalists had access in 1974.

In fact, inventory hasn't even been taken since 1986, and the last audit took place in 1953. All of this begs the question of why government officials would visit the site now.

Could the looming debt ceiling deadline on Sept. 29 justify a visit to America's gold? They might want to make sure it's all there just in case the United States can't issue more right now, and it will run out of extraordinary measures to keep the government solvent by the end of September.

But gold investors are positioned to profit from the controversy. I'll discuss how the debt ceiling debate could actually end up lifting the price of gold to my bullish target by the end of the year.

While day-to-day movements have been uneventful, the metal is still on track for a weekly gain of 0.4% if it closes at the current $1,297 level.

Life-Changing Profits: This investing strategy has racked up 28 triple-digit wins so far this year - and 42 in the last 12 months. To learn how to get in position for the next one, click here now...

Tuesday saw the dollar bounce back, regaining all of the previous session's losses. By early morning, the DXY was back above 93.50. That weighed on the gold price, which opened lower at $1,285. Although the metal moved higher from there, it wasn't enough for a gain on the day. Gold prices settled at $1,291 for a 0.5% loss from Monday's close.

Here's how the dollar has trended since Monday, Aug. 21... 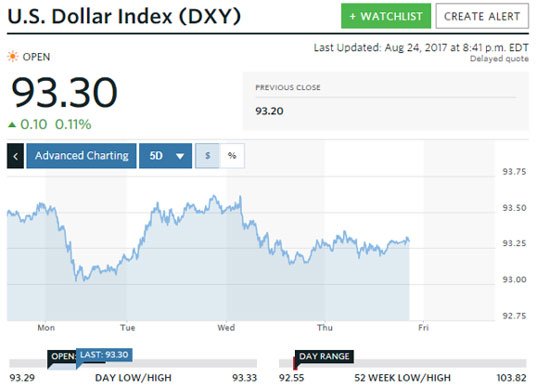 Gold prices closed mostly flat on Thursday as the DXY traded mostly near the 93.25 level throughout the day. After opening sharply lower at $1,287, the metal moved higher during the session to close at $1,292. That marked a 0.2% decline on the day.

After a week of hardly any daily movement, now is the best time to look ahead to see how the dollar and the anticipated debt ceiling deadline could influence the gold price in 2017.

I think both the DXY and Sept. 24 deadline could provide a boost to the metal through the end of the year. In fact, here's precisely where I see gold heading by the end of Q4...

My Bullish Gold Price Target for the End of 2017