The price of silver has been flat lately, but that could change as the Fed considers its next monetary decision…

But as I mentioned in my gold update last week, the fast-approaching debt ceiling deadline on Sept. 29 could boost silver prices in 2017.

If the government can't raise the ceiling before then, the United States' AAA credit rating could be downgraded – a move which has historically led to stock market declines. When S&P downgraded the U.S. credit rating in August 2011, the Dow fell 2.7% over the following month. Another sell-off would spur silver buying as investors move into precious metals as a hedge.

But right now, the focus is mainly on the Fed and whether or not there's another rate hike on the table in 2017. That – combined with stronger technical indicators for silver right now – reinforce my bullish silver price targets for the rest of the year.

Before I get into those, here's a recap of silver's movement last week…

Here's a look at the DXY's action last week… 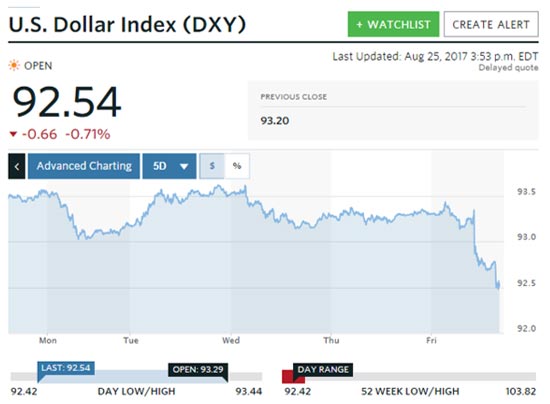 Despite the dollar moving mostly sideways on Thursday, silver prices gave back all of the previous session's gains. They opened near $16.88 at the open and moved higher throughout the session to close at $16.96. Despite that, prices still logged a 0.5% decline on the day.

On Friday, Aug. 25, the price of silver popped to $17.12 at the open. It fell back to trade near the $17 mark as Yellen's speech at the Jackson Hole symposium sidestepped comments on the U.S. economy's health and monetary policy. By late afternoon, silver had climbed back higher to close the day at $17.05 for a 0.5% rise. That marked a weekly gain of 0.3%.

With silver steadily gaining momentum over the last week, I think it still has more room to run higher as we move into the last four months of 2017. This will largely depend on a potential FOMC rate hike this year and continued strength in silver's technical indicators.

My Bullish Targets for the Price of Silver in 2017