The case for Coinbase becoming the first Bitcoin stock to go public keeps getting stronger. 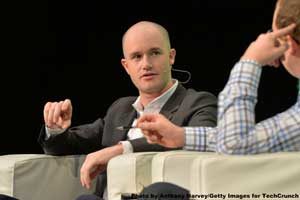 It was the second-largest funding round for any Bitcoin startup to date, bringing the total amount invested in the company to $217.2 million. And the round boosted Coinbase's valuation to $1.6 billion – making it the first Bitcoin "unicorn."

IVP wasn't the only heavy hitter in the round, either. Also participating were Draper Associates, headed by Tim Draper, as well as Greylock Partners, which put money behind Facebook Inc. (Nasdaq: FB), Airbnb, and Pandora Media Inc. (NYSE: P).

But having a lead in VC funding is just one reason Coinbase is a near-lock to be the first Bitcoin stock. For instance, its business has exploded this year…

Coinbase is made up of several related businesses that operate in 32 countries. The best known is the wallet, which allows customers to buy, sell, and store three of the top cryptocurrencies – Bitcoin, Ethereum, and Litecoin.

Finally, Coinbase offers a service to merchants allowing them to accept Bitcoin as payment. Among its 46,000 customers are Overstock.com Inc. (Nasdaq: OSTK), Dell Inc., and Expedia Inc. (Nasdaq: EXPE).

The wallet and exchange businesses in particular have been growing at an exponential rate.

Throughout 2017, the Coinbase wallet and its GDAX exchange have facilitated about $15 billion worth of transactions – more than five times last year's total volume. 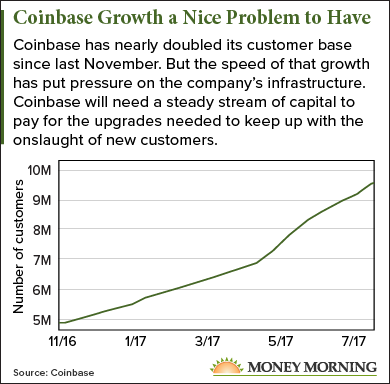 And the number of customers has skyrocketed. The customer base has nearly doubled in less than nine months, from just over 5 million at the end of 2016 to 9.7 million now.

Of course, such rapid growth is a double-edged sword. Coinbase hasn't been able to upgrade its systems fast enough to handle all the volume, especially at peak times. This results in slow response times or worse, temporary system outages.

Such issues have struck Coinbase several times over the past year. Major Bitcoin price swings, as happened in May and June of this year, are accompanied by spikes in volume that stress all Bitcoin exchanges.

The company says it will use the $100 million to scale its business to accommodate its growing number of customers.

But Coinbase will need to keep spending steadily to keep up with the kind of growth it's likely to see over the next few years.

Rising revenue will help; Coinbase collects fees from each of its three businesses. But it's unclear if the company is yet making a profit (CEO Brian Armstrong admitted one year ago on Reddit that Coinbase was not profitable at that time).

That means over the next couple of years Coinbase will have plenty of incentive to have an initial public offering to raise the capital it's going to need.

In fact, Coinbase is an ideal candidate for an IPO – and in so doing, could become the first Bitcoin stock…

Why Coinbase Is Destined to Be the First Bitcoin Stock

Coinbase "is" easy to use. They "do "verify" and they did "manage" to deposit into my USD account. The only problem is that they need "the call #." I have a sophisticated emergency response device that does not allow random calls… but, I could really use BITCOIN there.

I liked coinbase at first. However: It will allow Canadians to purchase stocks but then they cannot sell them. Not a very ethical practice for any company to do. I tell as many people as I can to invest in another company until coinbase gets organised and fair to its' investors.

I'm having a great deal of trouble getting my Coinbase account properly setup. Do you know of a way I can contact the company directly to get some help? They don't seem to respond to my e-mails at contact@coinbase.com