The renewable energy sector is expected to double in production by 2025, which is why we are bringing you the best energy stocks to invest in right now in this sector. 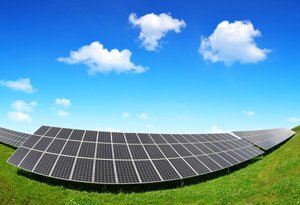 According to the U.S. Energy Information Administration (EIA), the renewable energy industry is going to produce 100% more energy by 2025. But the growth for specific renewables like solar and wind will be even more astounding. Solar energy production alone is expected to grow over 500% by 2040.

And it's not just in the United States where energy investments are growing either. China already smashed its 2020 solar energy target after raising its capacity to 112 GW this year. It was planned to be at 105 GW by 2020. In the Europe Union, officials are debating requiring 35% of member countries' energy to come from renewables by 2035.

And this soaring production makes these two energy stocks to buy even better investments...

Worldwide demand for energy is expected to grow 25% by 2040, and renewables are going to be essential to meeting that demand.

You see, alternative energy has two major advantages over traditional sources of energy like oil and natural gas. While oil and gas aren't going anywhere, falling prices in the alternative energy market, alongside the clean energy they produce, are helping them expand.

Because energy from the sun and wind is free and limitless, harnessing this energy is only a matter of technological development. As the technology improves, the costs of solar and wind energy will continue to fall.

For example, the costs of solar energy are just 1/150th of what they were in the 1970s. And wind energy is now the cheapest source of energy for new power plants, according to the EIA.

Achieving grid parity means it costs the same or less to produce electricity by using solar and wind than by using the traditional grid, typically powered by coal or natural gas. On top of that, wind energy is now the cheapest source of energy for new power plants, according to the EIA.

It's no surprise, then, that more than half of all new power generated in 2016 came from clean energy sources.

But falling costs aren't the only reason renewable energy is growing...

Because energy from wind and the sun is both free and does not pollute, renewable forms of energy have baked-in advantages over their fossil fuel rivals.

Gas, oil, and coal each require recovery from inside the earth and have to be stored and transported, which adds to their costs. For example, American shale oil costs so much to extract that it's only profitable for companies when oil prices rise. For some oil patches, that price can be as high as $80 a barrel.

And because renewable energy doesn't lead to pollution or produce carbon, governments are more willing to encourage its use to improve air quality and combat climate change.

While the United States' withdrawal from the Paris Climate Accord might sound like a blow to clean energy, Moors reminds us it isn't. Because the agreement was voluntary and non-binding, the United States' participation won't change the global demand for renewables, says Moors.

Between falling costs and rising demand for renewables, it's no wonder energy forecasts have both solar and wind pegged for triple-digit growth. The EIA predicts that electricity produced from wind energy will grow 118% by 2040, and electricity from solar will soar 376% in the same time.

That's why this is the perfect time to invest in an energy source that's about to take off.  We've got you covered with the two best stocks to do it with...

The 2 Best Energy Stocks to Invest in Right Now