An Ethereum price prediction of $1,000 within two years is well within reach. That would represent a gain of more than 156% from this week's price of $390. 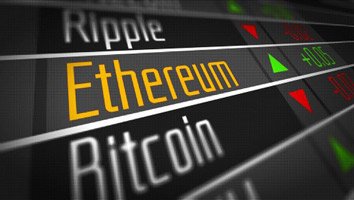 It wasn't that long ago that Ethereum price predictions of $500, or even $400, seemed bold.

As recently as late July, Ronnie Moas of StandPoint Research had an Ethereum target price of $400. At the time, Ethereum was trading at about $200, so he was forecasting a 100% gain in six months.

A little over a month later, the price of Ethereum is just a few dollars away from hitting that target.

And yet some cryptocurrency experts say Ethereum is still a bargain...

Why the Current Ethereum Price Is "Cheap"

Take Luis Cuende, a 21-year-old tech wunderkind who hails from Spain. Cuende is the co-founder and project lead of a cryptocurrency called Aragon, which had its ICO (initial coin offering) in May. Like many cryptocurrencies, Aragon is based on Ethereum.

Cuende's close association with the Ethereum platform changed his view of its potential value.

"I thought it was expensive one year ago when it was at $13, but today when I see the possibilities created by the technology I think it's cheap," Cuende said in a July 2 interview with Spain-based Itnig. "I believe Ethereum will be worth $1,000 in a couple of years."

Cuende sees Ethereum benefiting from the overall growth and adoption of cryptocurrencies, which is at a very early stage right now. 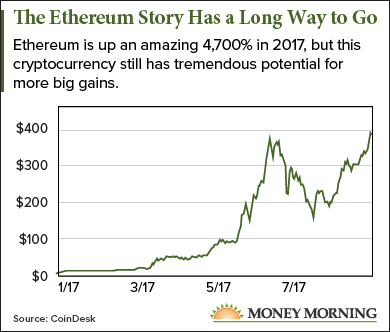 "Compared to the world's economy, crypto is a tiny drop in a lake, and this lake is a tiny drop in the ocean. The total market capitalization of crypto is $100 billion [it's over $170 billion now], which is nothing in a macroeconomic perspective," Cuende said. "Secondly, crypto hasn't achieved its promises just yet. When it achieves 10% of what it promised to do, I can't even imagine how crazy that will be."

Ethereum has plenty of real-world catalysts driving it already:

With such powerful catalysts as tailwinds, the question isn't whether the Ethereum price will go higher, but by how much.

Here are several Ethereum price predictions for both the short term and the long term...

Since cryptocurrencies aren't stocks or attached to a national economy like fiat currencies, we have to get more creative when trying to forecast their future value.

One way is crowdsourcing - asking a group of knowledgeable people to make their best estimate based on what they know and expect to happen.

That's what Pascal Thellmann did in June. Thellmann, the marketing and content creator for SocialX, a blockchain network that integrates social media with cryptocurrency rewards, used Reddit to solicit Jan. 1, 2018, Ethereum price predictions from the Ethereum community.

Another idea is to use the average number of daily transactions to calculate a price. Ken Liu, a cryptocurrency trader and consultant, discovered that price increases are linked to transaction volume.

In a Quora post in May, Liu noted that the Bitcoin price has increased exponentially to the rate of transaction growth.

Using that formula, Liu estimated an increase in Ethereum's average daily transactions of between 2 and 2.5 times the rate at the time (about 140,000) would result in an increase in the price of Ethereum by a factor of between 4 and 5.25. This would yield a price between $420 and $551.

That was on May 17. Since then, Ethereum transaction volume has indeed increased about 2.5 times. And the Ethereum price is nearing $400 - four times what it was when Liu wrote the post.

At the rate it's increasing, it could happen before the end of this year, or early in 2018 at the latest.

Ihave subscribed to no less than 10 different publishing, some of them I have gone up to the more expensive level ( about US 2k. I am right into crypto since June 2017 after learning and following it. I have found the info I got from moneymorning has been quite useful and informative. I have coped a hiding using CFD in Australian Platform when bitcoin dropped to US 1790 in july, just learnt from it. I am doing ok with ETH.hope to get more useful info and guidelines from this site, so far it is the best out of the lot.keep up with the good work and hope I will be able to get into a higher level in the near future
Alexander Cheung Melbourne Australia

An Ethereum price prediction of $1,000 within two years is well within reach. That would represent a gain of more than 600% from this week's price of $390.

More like fat fingers on the calculator at the end of the day. Thanks for pointing out the error, which has now been corrected. And thanks for reading Money Morning!