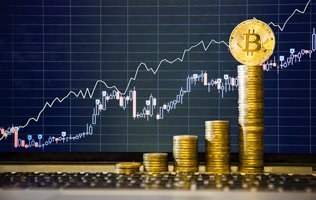 Businessman John McAfee predicted in July this is just the start of a massive Bitcoin price run. In a July 7 tweet, the founder of McAfee and Associates said the price of Bitcoin will hit $500,000 by 2020.

That would be gains of more than 10,000% from today's Bitcoin prices in just three years.

McAfee's price target might sound far-fetched now, but the price of Bitcoin climbing to $1 million could happen...

Why Bitcoin Prices Could Climb to $1 Million by 2027

Wences Casares, the CEO of Bitcoin wallet startup Xapo, said that Bitcoin prices could reach $1 million in 10 years in a May 22 speech.

Bitcoin will become a "global standard of settlement." That means Bitcoin will be the new way we pay for everything from groceries to houses.

And we said this was possible all the way back in June...

"If Bitcoin replaced the U.S. dollar as the world's reserve currency and became the primary means of settlement in global trade, one bitcoin would need to be worth about $1 million. This actually has a realistic chance of happening," Money Morning Cryptocurrency Expert David Zeiler said on June 15.

"The run of each of the last five global reserve currencies has lasted about 100 years. The U.S. dollar is due to be replaced."

According to a May 23 Quartz report, Casares said gold used to be the global standard for settlement for 5,000 years.

"If you wanted to compare how much it cost Cleopatra to put together an army to how much it cost a Chinese emperor, it was straightforward. We don't have that today,"Casares said, according to Quartz.

Of course, like with any investment, Casares warned there are risks. He believes the odds of Bitcoin failing and going to zero dollars is at 20%. However, he also believes the odds are greater than 50% that Bitcoin prices reach $1 million.

He recommends using 1% of what you own to buy Bitcoin.

"You either lose 1% of your net worth, which most people can take, or you make millions," Casdares said, according to QZ.com.

The Bottom Line: Bitcoin prices today are trading at record highs, but that's just the start. John McAfee projects Bitcoin will trade for $500,000 in three years, and Wences Casares believes it could reach $1 million in the next 10 years. From today's price of $4,810.23, that's a potential profit of 20,689% in the next 10 years.