But because the ride-sharing giant has been racked with so many scandals and controversies, an IPO in 2017 won't happen. 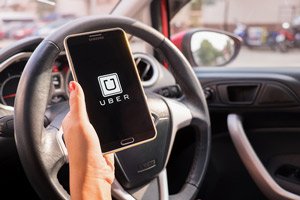 However, we now know the Uber IPO date could be set between 2019 and 2021, thanks to new CEO Dara Khosrowshahi.

Ahead of this highly anticipated IPO, we wanted to make sure Money Morning readers are prepared.

Here's everything you need to know about investing in Uber, including whether you should buy Uber stock when it goes public…

How Does the $70 Billion Company Operate?

Uber operates like a taxi service, but ride seekers don't hail a car or call anyone for a ride. Everything happens through the Uber app on a smartphone. The app will assign an available driver to pick up the passenger and take them to their destination.

Free Book: The secrets in this book helped one reader make a $185,253 profit in just eight days. Learn how to claim your copy here…

Once a ride is complete, the passenger is automatically charged through their credit card connected to the account. Uber keeps 20% of the total, and the driver gets the rest plus any tips.

Uber is also unique because its drivers are independent contractors who use their own vehicles. Because nearly anyone can sign up to drive, Uber is able to keep drivers on the streets across the country without a formal staffing process.

Now that you know how Uber operates, we wanted to provide more details on the recent scandals that have hurt the company…

Scandals Have Derailed the Uber IPO

Uber has dealt with so many scandals this year that its U.S. market share has dropped from 84% at the beginning of 2017 to 77% in May.

Why did this happen?

It all started with U.S. President Donald Trump signing an executive order banning citizens of Iraq, Syria, Iran, Libya, Somalia, Sudan, and Yemen from entry into the United States for 90 days.

A widespread protest broke out at New York's JFK airport, and the New York Taxi Workers Alliance (NYTWA) chose to join the protest with a one-hour strike.

Uber decided to still operate and pick up passengers.

But not only did Uber ignore the protest, it also raised its prices at the JFK airport, a tactic Uber calls "surge pricing." The #DeleteUber campaign that followed on social media prompted more than 200,000 Uber customers to delete their accounts, according to a Feb. 3, 2017, Fortune report.

Then, on Feb. 19, former Uber engineer Susan Fowler published a blog post that detailed her experience with sexual harassment within the company. A few days later on Feb. 23, Alphabet Inc. (Nasdaq: GOOGL) sued Uber for alleged theft of intellectual property.

In August, The Wall Street Journal broke a story about Uber leasing unsafe cars to its drivers in Singapore. In 2016, the company leased more than 1,000 Honda Vezel vehicles, which were under recall, and then re-leased those cars to Uber drivers.

One vehicle caught on fire because of the defect.

Now, Khosrowshahi has to deal with all these scandals when he officially starts working at Uber on Sept. 4, 2017. On top of that, he also needs to turn Uber's revenue around.

But if the new Uber CEO changes the company's culture ahead of the IPO, should you buy Uber stock?